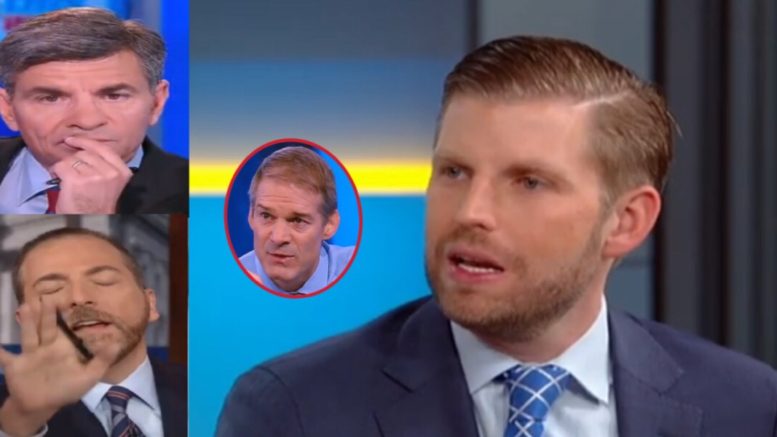 “This is why America is so sick of most of the mainstream media. Look at the way they ask questions. You had Senators that were literally having to shout and scream to be heard over the commentator. That’s not their role, but unfortunately, that’s the role the media is playing every single day these days,” Eric Trump said Monday on Fox News’ “Fox & Friends”.

He believes America sees what the media does and noted that the media is part of the Democrat Party. “They are advocates for the leftwing. They won’t even ask these candidates serious questions.”

Asked why the media wants to “investigate one party” so much, but not allowed to ask questions about the other party, Eric Trump responded, “Could you imagine if I got $50,000 a month in an industry that I knew nothing about, with no discernible duties from a Ukraine oil and gas company? Could you image that? Could you imagine if I got kicked out of the Navy for doing cocaine? … [Or] if I was caught with a crack pipe? Or many of the other scandals? … If China gave me 1.5 billion dollars after I flew over to China on Air Force 2 with my father?”

Trump explained that the media goes after his family and children, despite a scandal-free life and asked, “For what?” (Continued Below)

While discussing the Sunday interview between Sen. Ron Johnson (R-WI) and Chuck Todd, Eric Trump said, “You can just zoom out and boil this whole thing down. They know they’re not going to win in 2020. This whole thing is a clown show, they know they can’t win. They’re going to have their opportunity to win in 6 years. The economy is too good.”

(Related: After Landing In Reno, Warren Gets Greeted By Protesters Who Surround Her & Chant ‘Stop The Impeachment’)

“America is behind my father; you finally have patriotism back!” he expressed. “You finally have religious liberty back. You finally have are military back and rebuilt, our economy is booming. Everything the man said he was gonna do, he did. And he’s driving them crazy!” (Video Below)

Ainsely Earnhart pointed out when you’re watching leftwing shows and one may bring up “a good point” that people in America may be interested in, the hosts won’t allow it if it doesn’t fit their narrative. “They interrupt and they don’t let these politicians finish their sentences,” she said.

“It is dangerous to this country,” Eric Trump said. “Honestly, the media in doing that, they pose a danger to this nation. Look at the advocacy there. Stephanopoulos… I mean, come on. Anybody ever seen the movie ‘War Room’? I mean, Stephanopoulosof all people. And by the way, he can’t even answer. When you had Jim Jordan out there saying, ‘Well why did [Hunter Biden] get a billion and a half dollars from China?’ … And Stephanopoulos is sitting there stuttering,” Eric Trump concluded.