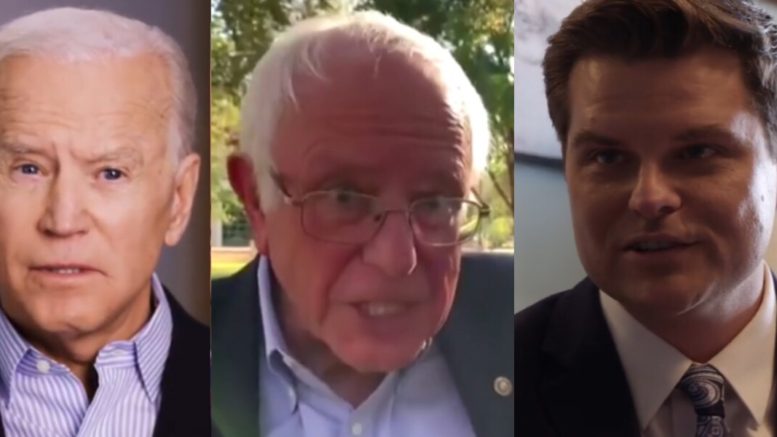 As the Ukrainian controversy continues over President Trump’s phone call between him and Ukrainian President Zelensky, Democrats and the media remain lockstep with each other as they cover for alleged Biden family corruption and the origins of the Russia probe.

Democrat lawmakers and their media allies have seemingly come up with a new talking point: “President Trump doesn’t understand or respect the Constitution,” amid the Ukraine drama and the President digging into what the intelligence agencies reportedly did during the 2016 presidential election against him and his campaign.

Bernie Sanders took aim at the President on Twitter Sunday, drumming up the base with the talking point and wrote, “Maybe I’m old fashioned. But I believe we should have a president who believes in the United States Constitution.”

(Related: Pence Pulls A Priceless Reaction Out Of Venezuela’s Ambassador After Telling Him To Go Home)

Rep. Matt Gaetz, however, dropped the mic when he responded to Sanders writing back, “Maybe I’m old fashioned. But America will NEVER be a socialist country.” (Continued Below)

Next, Gaetz went after Joe Biden to ask a pointed question.

“Honest question for @JoeBiden: If you are elected President are you cool with Hunter working for foreign corporations like he did when you were VP? #Asking4AFriend” the Florida Congressman wondered.

Investigative journalist, John Solomon of The Hill, released hundreds of pages of never-released memos and documents that cast doubt with Biden’s narrative and raises troubling questions. Ukraine’s new president, Volodymyr Zelensky, told Trump in July that he plans to launch his own wide-ranging investigation into what happened with the Bidens and Burisma. (Video Below)

But America will NEVER be a socialist country. https://t.co/Ss7Lzz32cL

If you are elected President are you cool with Hunter working for foreign corporations like he did when you were VP?#Asking4AFriend

We leave you with Rep. Gaetz knocking Andrew Gillum, who lost in the 2018 midterms to Ron DeSantis for Florida Governor.

Gillum spoke with CNN on Sunday to claim that he would “refer his elected officials to be on the ‘side of the Constitution,'” in reference to President Trump and the Ukraine controversy, using the Democratic talking point of the day.

(Related: Gillum Calls DeSantis’ Voting Bill Racist & Vows To Fight It, Gaetz Fires Back: ‘You Can Just Call Him Governor’)