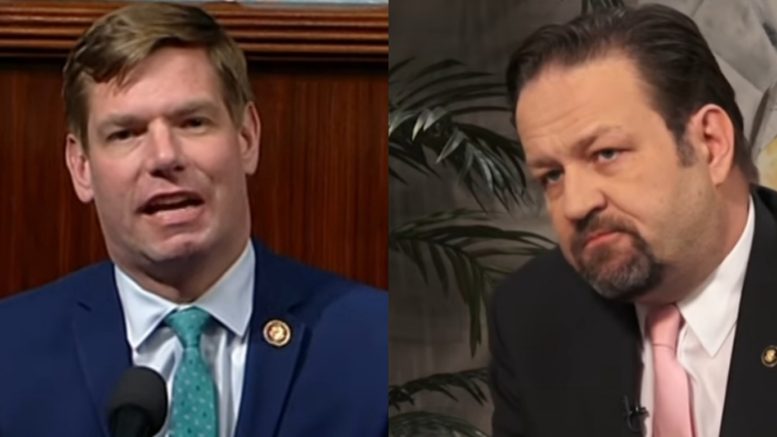 President Trump’s former Deputy Assistant, Sebastian Gorka, was not in the mood for Eric Swalwell’s rhetoric on Thursday in regards to a tweet the Californian Democrat representative posted.

In retaliation for President Trump’s ongoing attacks on Rep. Adam Schiff, Swalwell suggested that Trump “confessed” to a crime and already “plead guilty.” And to top it off, he said the President should now wonder what his “sentence” is going to be.

Swalwell tweeted: “As @realDonaldTrump continues to attack @RepAdamSchiff and the process, remember this. Trump confessed to the crime. We have his confession. He copped to it. Process attacks only help if you didn’t already plead guilty. It’s not whether you did it. It’s what is your sentence.”

Sebastian Gorka fired back upon seeing Swalwell’s tweet and questioned where the Congressmen’s logic is coming from.

“What crime is that President Swalwell?” Gorka asked. “Asking a partner nation to abide by their legal, bilateral obligation to fight corruption?”

He then provided a link to the downloadable pdf version of the treaty that President Bill Clinton signed with Ukraine and delivered to Congress in the late 90’s titled: “TREATY WITH UKRAINE ON MUTUAL LEGAL ASSISTANCE IN CRIMINAL MATTERS” See Below

The copy of the treaty Gorka provided speaks for itself, as he was signifying that the President is following his obligation to work with Ukraine on matters that may be criminal, which doesn’t exempt someone running for President such as Joe Biden. This was previously laid out by Jesse Watters and can be seen by CLICKING HERE.

Gorka then capped off his response back to Swalwell by asking: “BTW: how’s that nuclear arsenal you want to use against those you disagree with?” See Below

What crime is that President Swalwell?

Asking a partner nation to abide by their legal, bilateral obligation to fight corruption?

As per Congressional requirements: https://t.co/8CqqulrNc0

(BTW: how’s that nuclear arsenal you want to use against those you disagree with?) https://t.co/WWHoaWUdSv

By bringing up a “nuclear arsenal,” Gorka was referring to a tweet Swalwell sent out last year, where he replied “the government has nukes” and it would be a “short war” in response to an apparent gun owner on Twitter who argued that if the government tried taking citizens’ guns, it would lead to a war between the people and the government.

We leave you with that tweet from Swalwell, but feel free to CLICK HERE to learn more on thst story.

And it would be a short war my friend. The government has nukes. Too many of them. But they’re legit. I’m sure if we talked we could find common ground to protect our families and communities.