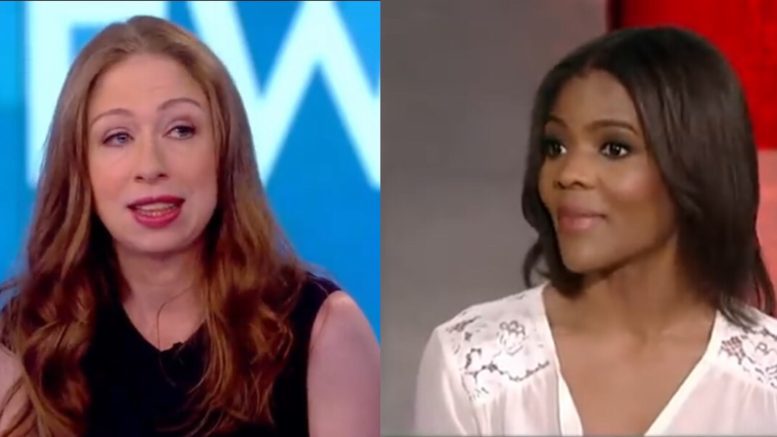 Twice-failed Democratic presidential candidate and former Secretary of State, Hillary Clinton, along with her daughter, Chelsea Clinton, spoke with the “The View” to promote their book “Gutsy Women”, Wednesday.

Chelsea said during the segment, “This is not the country I want my kids to grow up in,” seemingly taking aim at President Trump and “referring” to policies of the Trump administration. Candace Owens however, took to Twitter to react to Chelsea’s assertion.

President Trump tweeted in all caps last week amid House Speaker Nancy Pelosi (D-CA), who announcied a formal impeachment inquiry, “THE GREATEST SCAM IN THE HISTORY OF AMERICAN POLITICS!”

Asked about her tweet Wednesday on “The View”, and if she was scared of poking the bear, Chelsea claimed, “I do believe he’s the greatest scam in American political history,” she said, adding that she thought President Trump’s “whole life” had been a scam. “People are suffering every day because his scam, thus far, has succeeded at the highest levels.”

When asked about her “change” of now being politically vocal, the former first daughter responded, “I am so proud of my mom. I’m very biased toward her, love her very much and feel very protective of her, although I know she doesn’t need me to be. But, really my most important role now is as my kid’s mom.” (Continued Below)

“You know I have a daughter Charlotte who just turned five last week, a son Aiden, he is three and baby Jasper just two months old,” continued Chelsea Clinton. “And I think about the country they’re living in right now, and ‘it’s not the country I want them to grow up in,'” Chelsea said.

“We learned last night that President Trump wanted to dig a ditch at the border and put alligators in the ditch and snakes, and shoot migrants in the leg,” she continued referencing a report from CNN that President Trump blasted as fake news. “The depths of cruelty and inhumanity towards migrants, towards people of color, towards LGBTQ community, war heroes, women, is not the America I want my kids to grow up in. And I’m going to do everything I can to ensure that is not that they grow up in.”

“Now the press is trying to sell the fact that I wanted a Moat stuffed with alligators and snakes, with an electrified fence and sharp spikes on top, at our Southern Border. I may be tough on Border Security, but not that tough. The press has gone Crazy. Fake News!” President Trump said Wednesday responding to the report. (Continued Below)

Candace Owens, however, took note of Chelsea’s claims and swiped back on Twitter. “Dear @ChelseaClinton: Your parents opposed gay marriage, crippled Haiti, and locked up more black people than any President in United States history,” Candace pointed out.

“The ‘America’ you ‘don’t want your kids to grow up in’, is the literal household within which you were raised, fraud,” she added.

In 1996, former president Bill Clinton signed the Defense of Marriage Act, and said that he had “long opposed governmental recognition of same-gender marriages.”

“My preference is that we do all we can to strengthen traditional marriages and that the people engaged in parenting children be committed to one another and to the child. We also have to be realistic and know there are others who can do a good job, as well, of raising children,” Hillary Clinton told The San Francisco Examiner in 1996.

“Marriage has got historic, religious and moral content that goes back to the beginning of time, and I think a marriage is as a marriage has always been, between a man and a woman, Hillary said in 2000, while running for the Senate in New York. (Continued Below)

According to GOP, the Clintons made public overtures promising to rebuild Haiti following the devastating 2010 earthquake. Despite the Clinton’s promises to rebuild Haiti, the country still “looks like the earthquake happened yesterday.” Their misguided “efforts” which have given contracts to Foundation donors and family members have resulted in a resentment from the Haitian people who feel that their huge spending projects went to the wealthy and haven’t improved the lives of the people who need help the most.

Violent Crime Control and Law Enforcement Act of 1994, was passed by Bill Clinton, which provided funding for tens of thousands of community police officers and drug courts, that banned certain assault weapons, and mandated life sentences for criminals convicted of a violent felony after two or more prior convictions, including drug crimes. The mandated life sentences were known as the “three-strikes” provision.

In a speech at an NAACP convention in Philadelphia in July, Clinton acknowledged that tougher incarceration provisions in the bill were a mistake. “I signed a bill that made the problem worse,” Clinton said. “And I want to admit it,” as reported by Fact Check.

Although Hillary Clinton was not in the Senate at the time and did not vote on the bill, she spoke in favor of it at the time. Asked about the law during a Democratic debate on March 6, Hillary Clinton said that “there were some aspects that worked well” including violence against women provisions, but she allowed that other portions related to increasing incarceration “were a mistake,” as per Fact Check.

Hillary Clinton also has been criticized for using the term “super predator” in 1996 to describe kids with no conscience, no empathy. “They are often the kinds of kids that are called ‘super-predators,'” Clinton said, at the height of anxiety during her husband’s administration about high rates of crime and violence. “No conscience, no empathy, we can talk about why they ended up that way, but first we have to bring them to heel.” (Video Below)

Dear @ChelseaClinton :
Your parents opposed gay marriage, crippled Haiti, and locked up more black people than any President in United States history.
The “America” you “don’t want your kids to grow up in”, is the literal household within which you were raised, fraud. #MAGA https://t.co/3ICLCRs1YV