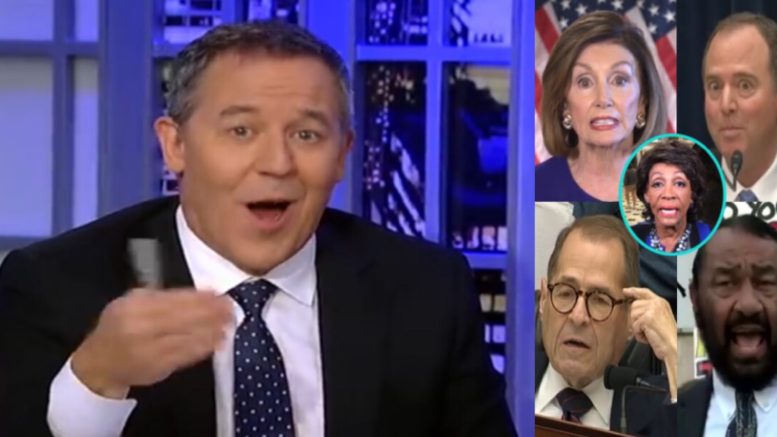 Fox News’ Greg Gutfeld, weighed in on the Democrats’ “field of dreams impeachment strategy” during his opening monologue Saturday on the “Greg Gutfeld Show”.

Further, he made a positive out of a negative amid Democrats and the media who have compared President Trump to a “Mafia boss” by suggesting that they are actually complimenting him.

“The media and the Democrats, two peas in a pitiful pod,” Gutfeld said as he proceeded to show a clip of House Intelligence Committee Chairman, Adam Schiff (D-CA), who fabricated President Trump’s phone call with Ukrainian President Zelenky– during his opening statement at Thursday’s hearing with Acting Director of National Intelligence Joseph Maguire.

After a clip was played of Schiff claiming “This is in part what the President was trying to communicate”, Gutfeld responded, “No, it wasn’t. You made that up. Your defense?” he asked next, as he played another video of Schiff, who after he got called out at the hearing, then claimed, “My summary of the President’s call was meant to be at least, in part, in parody. The fact that that’s not clear, is a separate problem in of itself.”

“Oh, I get it. It’s our fault,” Gutfeld responded laughing. “We’re the adults who didn’t understand it. But, he’s got a point. After all, it is hard to tell the difference between him and a joke. But remember, this is Adam Schiff a guy who is so stiff, kissing him is considered necrophilia.”

He proceeded to show a picture side by side of Schiff and Woody from the movie “Toy Story”, saying that, ” Woody is still demanding a paternity test,” adding, “But the reason he gets away with being an idiot, is because his allies make him look sane.” (Continued Below)

Gutfeld played clips of the left-wing media peddling Schiffs talking points, smearing the President, and who also claimed that the Commander in Chief is a “mob boss.”

“Ah, the mob boss comparison again, as if that’s bad,” he continued. “What is a mafia boss get that Democrats don’t? Gutfeld asked. “Respect. Ask yourself this: Who would China, Russia, or Iran rather ‘not’ negotiate with? A mafia boss or a grad student majoring in moping? (Displaying a picture of Beto O’Rourke). A mafia boss or a guy who forgets where he puts his pants?” (Displaying a picture of former vice president Joe Biden).

He switched gears, noting that Democrats are now pretending they have “reached impeachment after much thought” adding, “Even though they’ve been snorting that drug for three years, which is why we can’t take it seriously, with first acknowledging that, which is orchestrated by the media.”

Gutfeld went on to say that when the White House released a transcript of President Trump’s call between him and Ukrainian president Zelenky, “you’d think the media would support Trump getting to the bottom of that”, referring to election meddling in 2016.

“Nope, the media’s golden rule: Only Trump can be investigated. So don’t bother us with Hillary’s campaign or that British agent pushing a dirty dossier. That’s just piss under the bridge,” he said. “Maybe Trump shouldn’t have brought up ‘Sleepy Joe’, but that’s Trump. I’m surprised he didn’t mention ‘Low-energy Jeb’ or ‘Da-Nang Dick’.”

“So the Dems and media turn a friendly conversation into extortion. But they’ve been warping Trump’s intent since he came down that famous escalator. Really, they’re trying to impeach his personality. Will Americans see through this charade?” Gutfeld asked. “An unidentified guy with a political bias brings a complaint about ‘what he heard?’ Second-hand from a phone call? It’s first leaked to the press, who takes the ‘hearsay’ over a transcript?” (Video Below)

“Now think about that. They ‘prefer hearsay’ over real words. That’s like relying on directions when your car has GPS. That’s like choosing tofu over steak. Or worse, Lenny Kravitz or Jimmy Hendrix. Then the media blames Trump for securing transcripts after they had gobbled up leaks of previous ones,” he continued. “That’s like a thief blaming you for changing your locks.”

“But this is business as usual. Literally it’s a business to the media. The ‘impeachment show’ is a money mill. Clicks go up, ratings pop! Plus nobody dies, unless you count America democracy,” Gutfeld proclaimed. “And we’re used to it. They were shouting ‘impeachment’ even before they could walk.” [Emphasized].

“You don’t have to like him at all to understand what is happening. It’s not about that phone call. It’s about the fact that someone closer to you, than to them, made it into the oval office. That’s a first; it can’t be permitted. It must be resisted. And really, even if that phone call never happened, it would’ve been something else next week. It was a ‘field of dreams strategy’. If you build the ‘impeachment’, the crime will surely come,” he concluded.