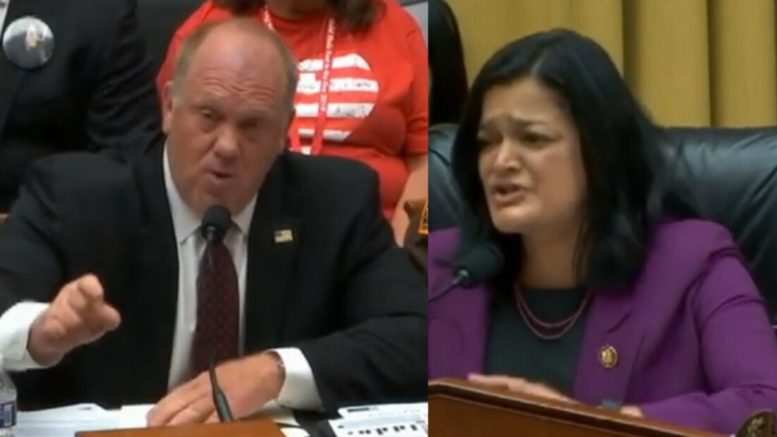 Jayapal, the vice chairwoman of the House Judiciary Immigration and Citizenship Subcommittee, repeatedly cut off Homan for exceeding his allowed time to speak.

A shouting match occurred when Tom Homan responded to a previous statement Rep. Jayapal made about the Trump administration’s use of funding for additional detention beds and he set the record straight while defending defend his former agency.

He also pointed out that under Obama, when there had been a surge at the border, “Congress was quick to give us all the money we needed to built the tent facilities, transportation contracts. We reprogrammed money… that was fine. Under the Obama administration, FY-12, we removed 409K people, half of what was removed last year. There’s no hearings on that. So, if this is about transparency, let’s be factual about it,” he continued.

Jayapal responded, saying, “I didn’t like it under the Obama administration either.” (Continued Below)

However, Jayapal grew frustrated and slammed down her gavel, but Homan shot back, “That’s dishonesty. It’s pathetic and it’s sad.”

Jayapal reminded Homan that in the past, he testified in support of Obama administration policies that were different from current policies, but when Homan asked if he could respond, Jayapal said no, as his time was up, to which Homan fired back, “Of course not.” (Continued Below)

Later in the hearing, Homan got another chance to speak and he used his time to blast Congress for problems at the border.

Jayapal interrupted Homan once again, telling him that his time was up, but he continued speaking over her. “The time of the gentleman has expired,” she said.

“I’ve asked you politely to let me go beyond my time, and you let other people go beyond their time, but not to Tom Homan!” the former ICE Director announced.

Jayapal slammed the gavel once again growing frustrated, but Homan declared, “This is a circus!” (Video Below)

(Related: Homan Teaches AOC A Lesson On Why Children Are Separated When Crossing Illegally: ‘Do It The Legal Way’)

Fact-Checked: Acosta Gets Caught Misinterpreting A Segment Of Trump’s Speech