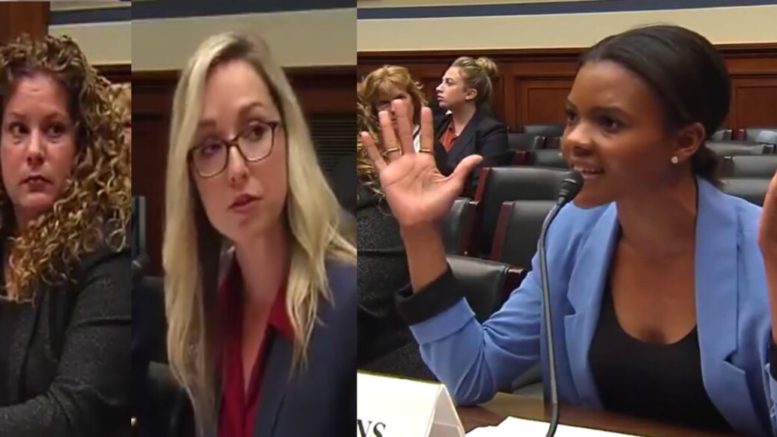 On Friday, the House Oversight Joint Subcommittee held a hearing on “Confronting White Supremacy”, and as Candace Owens put it, “this is what the left does every four years.”

The hearing heated up when Owens, a witness for the Republicans, ripped fellow witnesses and Democratic congressmen after the topic arose of her name being mentioned in the New Zealand shooter’s manifesto.

Candace Owens called out University of Chicago professor Kathleen Belew for suggesting that the words of a homicidal maniac are “more meaningful” than “her testimony” regarding policies that are actually hurting black Americans.

“I just have to say that I object strenuously to your use of the word ‘hilarious’. To me, this feels a lot like your reaction to being named in one of these manifestos. You’re of course, not responsible for the words of somebody writing the document. But, I do think laughing at it is a real problem, because these are real families that are impacted by this violence. And I think our efforts towards talking about this have to start from a place of mutual respect, which is what I’ve heard from this side of the table,” Belew said pointed at Owens.

Reps. Mark Meadows (R-NC) and Jim Jordan (R-OH) defended Candace Owens pointing out that the witnesses “ganged up” on her, along with taking her “words out of context.” (Continued Below)

“We’re giving these witnesses the ability to do a ‘rebuttal’ on you. I find it unfair, Ms. Belew. Candidly for you to show mutual respect and then, you to go after Ms. Owens, it’s not appropriate,” Meadows expressed. Then he offered Owens the remainder of his allotted time to speak.

Before Candace fired off, Meadows yielded to Jordan and the Ohio Congressman said, “I believe Ms. Owens when you used the word ‘hilarious’, it was referencing to the fact that no one asked you a question. It wasn’t to the subject matter of the hearing. Is that right? And to have another witness insinuate something that is not accurate is just not appropriate, Mr. Chairman, for how witnesses are supposed to behave in this committee.”

“I also think you didn’t say ‘it doesn’t matter’ about the ‘subject matter’ of today’s hearing, you said ‘there are other subjects that matter as well, and maybe we should spend some time on those.’ Is that accurate?” Jordan asked of Candace. (Continued Below)

Candace responded to Rep. Jordan and schooled the leftist professors who tried to lecture her:

“That is correct and they matter much, much, much, much more. And I said that in my opening and I will say it again. You know that ‘white supremacy’ and ‘white nationalism’ ranks nowhere near the top of the issues facing black America. And the reason that you are bringing them up in this room is because it is an attempt to make the election all about ‘race’, as the Democrats [do],” she said.

“Every four years you bring up race, and you knew exactly what I meant when I said, ‘hilarious’, and you just tried to do ‘live’ what the media does all the time to Republicans, to our President, and to conservatives. You tried to manipulate what I said to fit your narrative. I was not referring to the subject matter as ‘hilarious.’ I said, ‘it’s hilarious that we’re sitting in this room today and I’ve got two doctors and nobody can give us real numbers that we can respond to so that we can assess how big of a threat this is,'” Owens continued.

“Because you know it is not as big of a threat that you are trying to make it out to be so you can manipulate. The audacity of you to bring up the Christchurch shooting manifesto and make it seem as if I laughed at people that were slaughtered by a homicidal maniac is in my opinion absolutely despicable. And I think we should be above that,” she said.

“You would rather assign meaning to a homicidal maniac than to actually address the things that I said today that are actually harming black America. Number one: father absence. Number two: the education system and the illiteracy rate. Illegal immigration ranks high, abortion ranks high. White supremacy and white nationalism– if I had to make a list again of 100 things, would not be on it,” Owens pointed out. (Video Below)

“This hearing, in my opinion, is a farce. And it is ironic that you’re sitting here having three caucasian people testify and tell you what their expertise are. Want to know what my expertise are? Black in America! I’ve been black in America my whole life, all 30 years. And I can tell you that you guys have done the exact same thing every four years ahead of an election cycle. And it needs to stop!” Candace declared.

She also tweeted “Made-up professor @kathleen_belew made the SEVERE error today of personally attacking me at a hearing on White Supremacy. Let what happened next serve as a warning to every virtue-signaling, white liberal in America: Black America is DONE being used as an election-cycle prop.”

(Related: Candace Owens Recalls Her Favorite Fifteen Seconds While Facing Off With Congress)