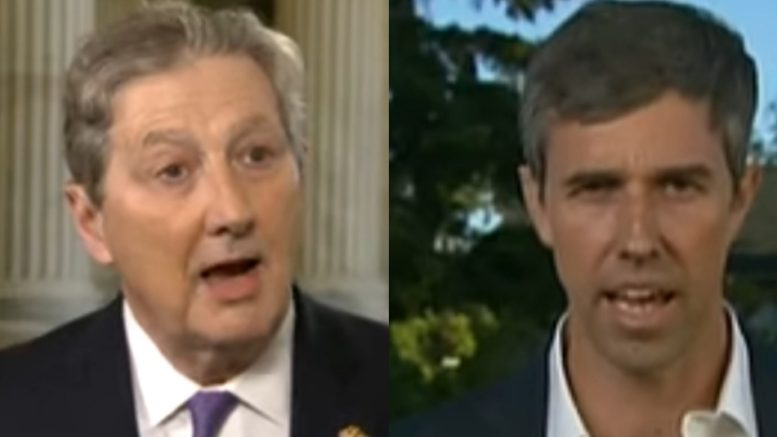 While facing CNN’s Chris Cuomo, Democrat Presidential candidate Beto O’Rourke doubled down on gun confiscation that he advocated for in last Thursday’s debate.

Beto ignited a national firestorm after he declared, “Hell yes, we’re going to take your AR-15, your AK-47!” and his campaign even made shirts to promote the idea.

And just under one week after voicing his controversial campaign pledge, Beto confirmed on CNN that he’s serious about it.

When asked by Cuomo if he does, in fact, “favor of gun confiscation,” Beto replied, “Yes, when it comes to AR-15s and AK-47s –weapons designed for use on a military battlefield.”

On Thursday, Senator John Kennedy responded to Beto’s double-down moment on gun confiscation by initially thanking the former Democrat Congressman for being honest. “His honesty is refreshing,” Kennedy said.

“I want to thank the Congressman for being honest because… I don’t agree with him,” he continued. “Beto’s copy of the Bill of Rights goes from one to three. Mine includes the Second Amendment.” Video Below

Sen. Kennedy went on to say there are a “whole host of people” in Washington, many of them being Democrats who would “be happy to confiscate America’s guns.”

“If you don’t believe that, then you probably also still believe in Big Foot. I mean, it’s a fact and everbody up here knows it,” Kennedy proclaimed.

When asked what his stance on guns control is, Kennedy stressed he is in favor of protecting the Constitution. “I believe love is the answer, but I want a gun just in case. I own handguns. I own several. I own shotguns. That’s my right as an American,” Kennedy declared. Video Below