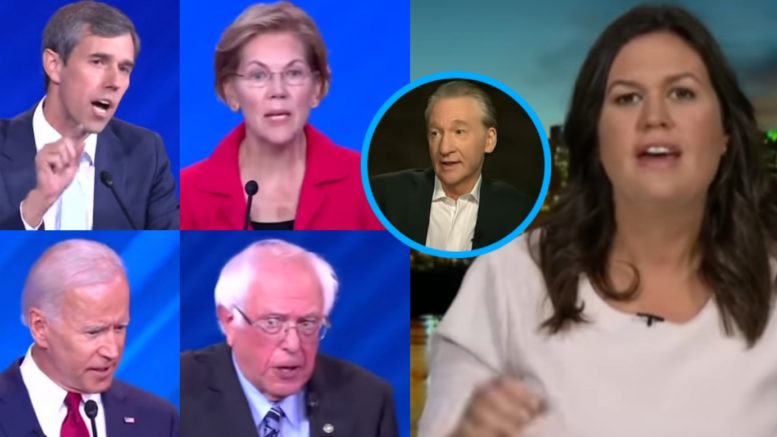 On Saturday, Sarah Sanders gave her take on several political topics that have been grabbing headlines over the past week. But one of the most interesting parts came when she discussed the race for 2020 and how it appears to be a contest among the Democrat candidates to see who can go “furthest to the left” on their ideas.

Jesse Watters played a clip of liberal commentator Bill Maher, who he said is “panicking” over the path Democrat Presidential candidates are taking in their race for 2020.

“If you run on taking away people’s health care and taxing taxing them too much and taking away all their guns, trans women get abortion rights — I think that came up in the first debate — I don’t think you’re gonna win this election,” Maher proclaimed.

Watters followed up with the clip by saying this is one of the few times he can say Bill Maher is right, which Sarah agreed.

Sarah said, “It’s hard to argue with the point that he’s making, which like you, I never thought I would say I agree with Bill Maher.” Video Below

“But, it’s true. I was watching the debate, and I couldn’t believethe things coming out of the Democrats’ mouth,” Sanders continued. “I thought surely this is a Saturday Night Live skit and it can be t be real life. But it was and it’s sad because they’re fighting each other to see who could get furthest to the left.”

I think it’s not just dangerous to their party, but it’s so dangerous for the country,” she added.

“And it is terrifying some of the ideas they are coming up with,” Sarah declared. “We heard time and time again Democrats say that the reason we have guns in this country is because of corruption. It’s not because of corruption! It’s because it’s our God-given right that was enshrined in the Constitution.” Video Below

Related Article: Democrat Senator Coons Scolds Beto O’Rourke For Promising ‘To Take Your AK-47’: ‘That Clip Will Be Played For Years’