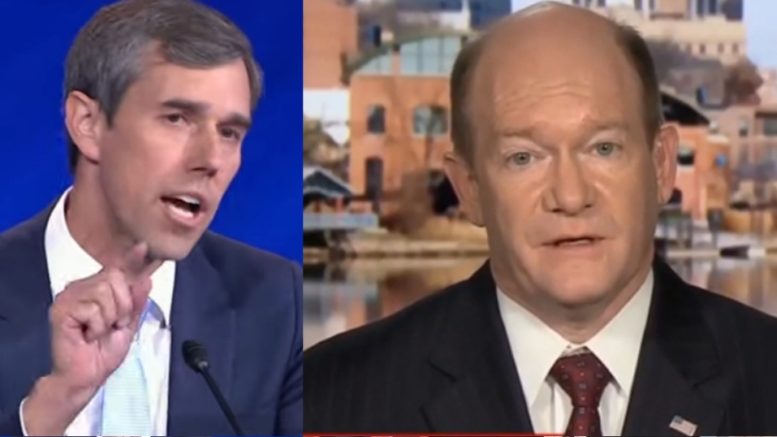 Democrat Senator Christopher Coons is not jumping on Beto O’Rourke’s bandwagon after the Presidential candidate promised to take away Americans’ AK-47s.

At Thursday’s debate, Beto drew cheers when he said, “Hell yes, we’re going to take your AR-15, your AK-47! We’re not going to allow it to be used against fellow Americans anymore.”

When pressed by CNN’s Poppy Harlow about O’Rourke’s bold statement, Coons voiced how he thinks it was a mistake that Second Amendment supporters will rally around “for years.”

Coons said, “I frankly think that that clip will be played for years at Second Amendment rallies with organizations that try to scare people by saying that Democrats are coming for your guns.”

He went on to say that he is a gun owner and he and his sons go hunting and skeet shooting. As a gun owner, Coons doesn’t think it’s a wise move for any politician running for President to threaten to take anyone’s guns that they rightfully possess.

“I don’t think having our presidential candidates like Congressman O’Rourke did, say that we’re going to try to take people’s guns against their will is a wise policy or political move,” Coons declared.

Related Article: Cruz Proves Himself Right As Beto Says ‘Hell Yes, We’re Going To Take Your AR-15’: Politifact ‘Should Buy One Of His New T-Shirts’

Then when asked if O’Rourke’s will “hurt the Democrat party,” Coons replied, “We’ll have to see.” Video Below

Beto Says ‘We Need To Buy Back Every Assault Weapon’, Dana Loesch Levels Him: ‘Will You Use Guns To Take Them By Force?’