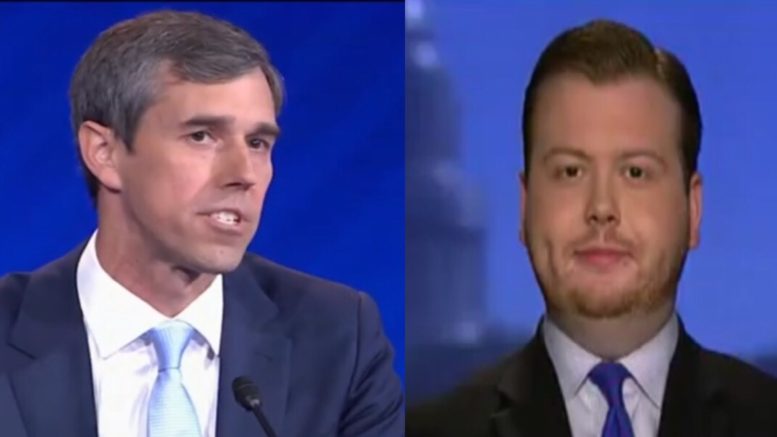 O’Rourke decided then and there that he “wanted to fit in,” that he didn’t “want to have a weird name that people don’t know how to pronounce.” He decided, for the first time, that he would no longer go by his childhood nickname but instead introduce himself by his given name, Robert. “I’m now a grown-up,” he recalled thinking, revisiting his three years at Woodberry in an interview with The Dallas Morning News. “And I want a grown-up name.”

Henry Rogers, a congressional correspondent for the Daily Caller, took to Twitter on Friday in a series of tweets to say that “he too attended Woodberry Forest” and noted the price of the tuition per year, along with shedding light on O’Rourke’s “privilege.”

Rogers said, “Robert Francis O’Rourke (@BetoORourke) went to my boarding school. The tuition is over $50,000 a year. The school has a golf course and a skeet shooting range… Privilege? Who is this guy pretending to be??

According to the school’s website, “The true cost to send a boy through Woodberry for a year is calculated at approximately $80,825. Our current tuition and room and board is $57,250.” (However, the cost may have been more or less when “Beto” attended.)

Rogers then tweeted, “I was very fortunate and grateful to have had the opportunity to attend @WoodberryForest. I would never say otherwise… I wonder what Beto (@BetoORourke) has to say?” (Continued Below)

The Daily Caller correspondent then asked O’Rourke, “Robert, are you going to send your kids to @WoodberryForest? If I had the money, I would. I’m just curious… Also, would you let them join the skeet team?

“Robert, would you be ok with your kids joining the @WoodberryForest skeet team? Or killing squirrels and birds in the woods on the weekends?” Rogers asked of Beto and included a photo.

According to Woodberry’s clubs and activities, “Rod and Gun Club is one of Woodberry’s most popular clubs. Boys store their guns securely in Woodberry’s safe and enjoy supervised hunting opportunities. They enjoy waterfowl hunting from their blind on Robertson Lake and fishing in the Rapidan River and on the school’s ponds and lake. The club offers a weekend duck-hunting excursion each winter and organizes a wild game tasting and skeet-shooting event each spring for all members of the community.” (Continued Below)

Rogers’ tweets come amid “Beto” vowing to take “your guns”, more specifically, he proudly announced that he “would confiscate your AR-15 and AK-47.”

“Hell yes, we’re gonna take your AR-15, your AK-47!” he declared, during the third Democratic presidential debate. “We are not going to allow it to be used against fellow Americans anymore.” [Emphasized]

I was very fortunate and grateful to have had the opportunity to attend @WoodberryForest. I would never say otherwise… I wonder what Beto (@BetoORourke) has to say?

Robert, would you be ok with your kids joining the @WoodberryForest skeet team? Or killing squirrels and birds in the woods on the weekends? pic.twitter.com/POf7DO9lXZ

(Related: Beto Says You Can’t Drive Tanks Down Streets Or Own Grenade Launchers, Dana Loesch Levels Him: ‘My Neighbor Drives His Tank Down Streets’)

Beto Says ‘We Need To Buy Back Every Assault Weapon’, Dana Loesch Levels Him: ‘Will You Use Guns To Take Them By Force?’

Alyssa Milano Asks If The Bible Supports Gun Rights, Ted Cruz Teaches Her A Lesson: ‘The Right To Self-Defense Is Recognized In The Bible’