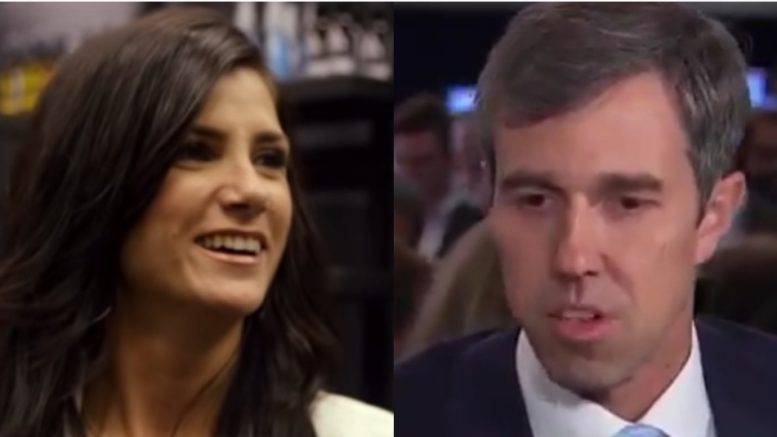 After the Democrat Presidential debate on Thursday, Beto O’Rourke doubled down on his stance against AK-47s and AR-15s while speaking with MSNBC reporters.

Earlier in the evening, Beto drew cheers from the audience and fired up a national debate when he pledged, “Hell yes, we are going to take your AR-15, your AK-47.”

In his post-debate interview, Beto attempted to justify his stance on AR-15s and AK-47s as he said he thinks “none of our rights are absolute” and that there are some “common sense limitations to them.”

“You can’t own a grenade launcher,” Beto claimed, “or drive a tank down the street. And I think we now understand that these AR-15s and AK-47s not only have been used as weapons of war within our communities, but as long as they exist in our communities, they are instruments of terror.”

Related Article: Democrat Senator Coons Scolds Beto O’Rourke For Promising ‘To Take Your AK-47’: ‘That Clip Will Be Played For Years’

Former NRA spokeswoman Dana Loesch leveled Beto after coming across his tweeted video of himself making such remarks on grenade launchers and tanks. See Below

Then, in reference to O’Rourke’s statement on tanks, she said, “and also my neighbor has a tank and literally drives it down the subdivision streets every Halloween.”

“People can own them,” Loesch declared. “You want to buy his tank? With his money he paid in taxes or your own money?” See Below

According to Wall Street Journal, tanks are very capable of being owned but generally aren’t street-legal, so owners usually drive them off-road or on other private property. However, authorities sometimes make exceptions for tanks to be driven on main roads for parades, a quick test drive or a trip to the gas station.

Other states also allow for the purchase of grenade launchers as long as the owner gets properly licensed.

In ending, here are a pair of other tweets Loesch unleashed at Beto O’Rourke for promising to take Americans’ AK-47s & AR-15s:

AOC Fumes As Rep. Boebert Posts a Photo of Her Boys Holding Rifles in Front of a Christmas Tree

Cruz Proves Himself Right As Beto Says ‘Hell Yes, We’re Going To Take Your AR-15’: Politifact ‘Should Buy One Of His New T-Shirts’