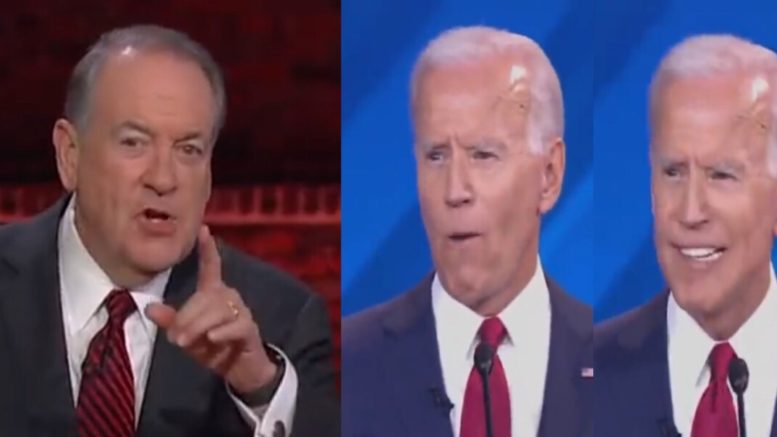 Former Arkansas Governor, Mike Huckabee, chimed in after the clip of Biden was spread on social media, which prompted claims that his “teeth were falling out.”

David Muir, ABC News host asked Joe Biden why voters should give him a second chance to pass gun control after there wasn’t any signed into law, while he was in office, in the aftermath of the Sandy Hook Elementary School shooting.

As Biden responded to the question, it’s not clear whether he was chewing gum or if he suffered an oral problem, but the moment was caught on camera of the episode with his mouth.

“Because I’ve got it done before. I’m the only one up here that’s ever beat the NRA,” Biden said during his dental malfunction. “Only one to beat the NRA nationally. I brought the Brady Bill into focus and became law.”

Mike Huckabee took to Twitter with a classic response while including the clip Biden’s malfunction. (Continued Below)

The former Arkansan Governor declared, “Joe won’t be President, but he’ll be able to do ads for Poli-Grip. Joe!”

(Related: Biden Takes An Extreme Stance On Gun Control As He Calls For Eliminating ‘Magazines That Can Hold Multiple Bullets’)

“We want the tooth, the whole tooth, and nothing BUT the tooth!” Huckabee expressed. (Video Below)

Joe won't be President, but he'll be able to do ads for Poli-Grip. Joe! We want the tooth, the whole tooth, and nothing BUT the tooth! https://t.co/cKQE1CDXiH

Halfway through his first term, President Bill Clinton signed the Violent Crime and Law Enforcement Act of 1994 into law. That 356-page bill included a ban on certain semi-automatic firearms and limits on the capacity of firearm magazines. It’s ghoulish and Orwellian short title was the “Public Safety and Recreational Firearms Use Protection Act.”

In the 1994 midterm elections soon after the ban’s enactment, Clinton’s party lost a net of 54 seats in the House, as well as 8 Senate seats.  The lobbyist attributed at least 40 of those losses to the “assault weapons” ban. Clinton himself later concurred that he had pushed too hard on the ban, effectively handing control of Capitol Hill to the opposition party.

Bill Clinton had no stronger critic in 1994 than the NRA. Yet, that episode is what Joe Biden now calls a “defeat” of the NRA.

Defeating the NRA may be a nice rallying cry for people who maintain committed to disarming law-abiding Americans, but taking their semi-automatic rifles won’t improve public safety. Some of the more honest members of the gun control movement admit this, including in articles published in such staunchly anti-gun publications as the New York Times, the Washington Post, Mother Jones, the Los Angeles Times, and Vice.com.

Greg Gutfeld On Kamala Harris: “Willing To Crush Kavanaugh & Biden, But When The Door Opens Up For Power, That All Goes Out The Window”