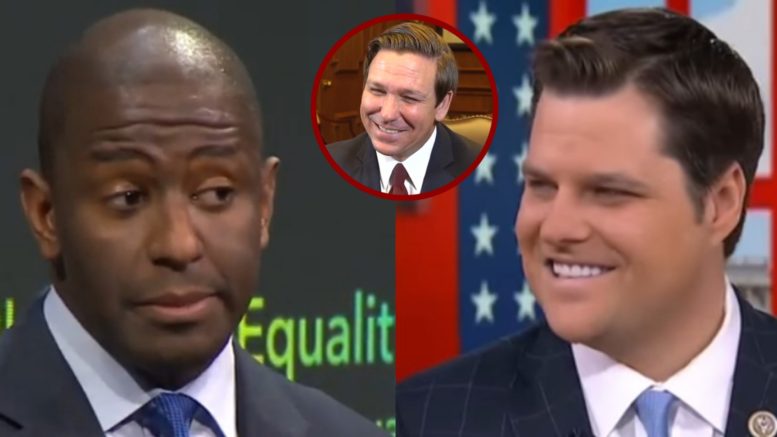 Florida Governor Ron DeSantis is facing a major test in wake of the aftermath of Hurricane Dorian.

Many areas of The Bahamas faced destruction as a result of Dorian, leaving thousands of its residents displaced as the country undertakes recovery efforts.

In a recent news conference, DeSantis urged Bahamians trying to flee to Florida to stay put as there is currently relief efforts underway for the country, thanks to generous donations by Floridians.

After a charity event in support for The Bahamas, DeSantis said, “If you just need the relief, that’s not what Florida’s set up for. Florida is helping to send resources to the Bahamas so the relief can be administered there.”

Andrew Gillum, who lost to DeSantis in the 2018 election, launched an attack after seeing a news article bashing the Florida governor’s remarks.

Gillum tweeted a hit piece against DeSantis by Newsweek and captioned it, “DeTrump doesn’t speak for the rest of us. Floridians are #BahamasStrong during this time of need. That’s what strong, diverse, compassionate states do.” See Below

DeTrump doesn’t speak for the rest of us. Floridians are #BahamasStrong during this time of need. That’s what strong, diverse, compassionate states do. https://t.co/TlviXSUPmC

While the Newsweek article Gillum tweeted did correctly quote a tidbit of DeSantis’s news conference, it failed to mention the tremendous effort currently underway as millions of dollars in relief and goods have been donated by Floridians for the hurricane-torn country.

As reported by Sun Sentinel, DeSantis has been leading an effort to get relief to The Bahamas as he said, “The name of the game is relief and stabilization.”

This week alone, Florida sent 10 truckloads of emergency water to the Bahamas, and DeSantis said $11 million in donations from Florida businesses had been pledged at that point, that would include $1.5 million for transitional housing which would help 1,000 people in the Bahamas “who would be able to be stabilized and have some housing.”

Florida’s celebrity residents, including Tiger Woods and Michael Jordan have also shown support of the cause, as Tiger promised to match up to $6 million , while Jordan pledged $1 million, according to Sun Sentinel’s report.

Of course, Gillum won’t mention such accomplishments listed above, as he would rather focus on anything that could shed negativity on his former opponent.

Representative Matt Gaetz, who also is from Florida and used to work alongside DeSantis in Congress, fired back at Gillum after seeing his tweet. See Below

Although his tweet was short and sweet, Gaetz completely humiliated Gillum and got the last laugh on the matter.

Gillum Calls DeSantis’ Voting Bill Racist & Vows To Fight It, Gaetz Fires Back: ‘You Can Just Call Him Governor’