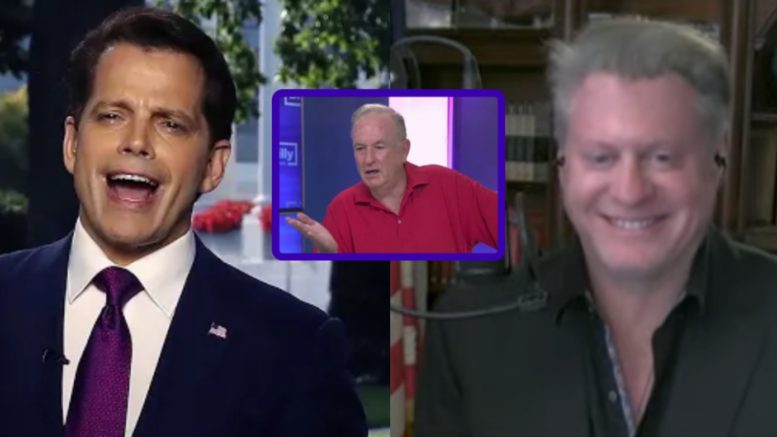 The discussion of Scaramucci was sparked when Allyn Root asked O’Reilly what he thought about CNN’s coverage and if it’s “bad for America” as stated by President Trump in a tweet.

“Are they (CNN) bad for America? I think they’re boring for America,” O’Reilly said after he complained that he doesn’t learn much from them.

At that point, O’Reilly brought up how he saw Scaramucci on CNN while channel surfing and he thought, “Alright, we get it. Anthony doesn’t like Donald Trump. Why else is he there? Why is this happening? There was no reason for it. There’s no reason for the interview. ”

Related Article: Jesse Watters Drops A Truth Bomb While Squaring Off With Scaramucci: ‘You Now Have Changed Bc [Trump] Has Always Been Like That’

Allyn Root responded by saying that he feels bad for Scaramucci and that he is a “friend” of his, but compared him to “Benedict Arnold.” Video Below

“This side hates you. And the left loves you for five minutes. But in the end, they don’t trust you when you tattle on someone else and rat on someone else,” he explained.

“And they don’t like his original politics. They know he’s faking it to get a TV show with CNN,” Allyn Root continued. “So, in my opinion they’ll turn on him soon, and they’ll drop him like yesterday’s news. You don’t win with anybody. Now you’re hated by both sides.”

“I think Scaramucci has screwed himself. I really do think it’s a terrible decision,” Wayne Allyn Root declared. See Below