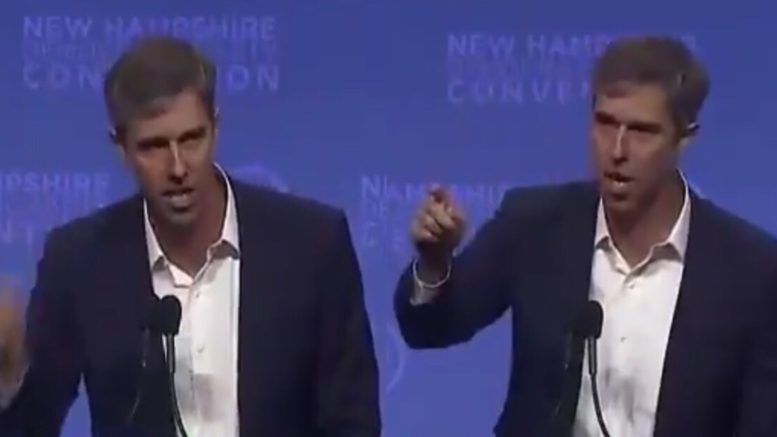 Beto O’Rourke, 2020 Democratic presidential candidate, spoke at the New Hampshire Democratic Party’s state convention in Manchester on Saturday where he vowed to “legalize” over 10 million illegal immigrants “if elected President.”

Nineteen of the Democrats running for president were in New Hampshire Saturday for the state party convention. The candidates all had the opportunity to speak from the Manchester stage and make the case that they’re the best Democrat to take on President Donald Trump, as reported by NECN.

While on stage Saturday and making the case for immigration, Beto O’Rourke pledged: “We’re gonna legalize the presence of more than 10 million in the United States, beginning with Dreamers who will never again fear deportation back to a country they do not know.”

“Because we will make them U.S. citizens in this, their true home country,” he added while the audience stood and cheered.

During the 2020 Democratic presidential debates, Sen. Elizabeth Warren of Massachusetts called for decriminalizing undocumented immigration. “The truth is, immigrants seeking refuge in our country aren’t a threat to national security. It’s time to end this draconian policy and return to treating immigration as a civil — not a criminal — issue,” Warren said.

Similarly, Sen. Bernie Sanders of Vermont agreed: “If a mother and a child walk thousands of miles on a dangerous path in my view they are not criminals they are people fleeing violence.” (Video Below)

Additionally, the Democratic candidates on stage during the debate raised their hands in favor of illegal immigrants receiving health care coverage.

(Related: Beto Tells Immigrants America Was Founded On ‘White Supremacy’, Gutfeld Fires Back: ‘He’s So White, Wonder Bread Could Sue Him For Plagiarism’)