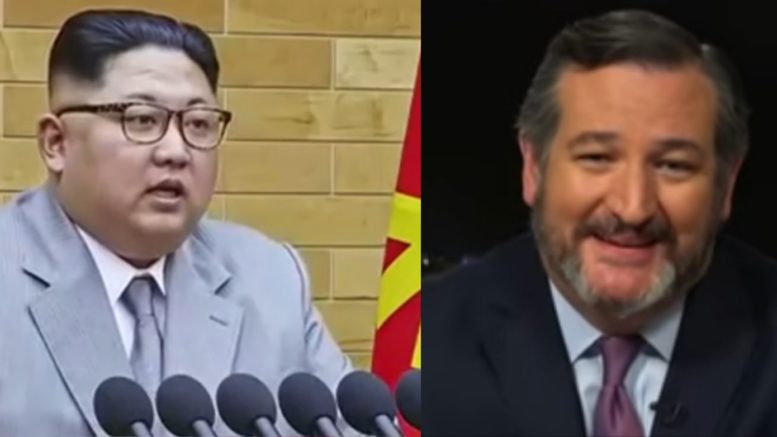 On Thursday, Korean Central News Agency released a commentary on behalf of North Korea’s government condemning Republican Senator Ted Cruz over his stance against the dictatorship.

Without specifying exactly what Cruz said about them, North Korea accused the Texas Senator of “slander” and “mud-slinging” in their statement, according to Newsweek.

North Korea is quoted as saying:

“His behavior is sure to make everyone take him as a remnant of Nazis with extreme misanthropy or a hysteric psychopath bereft of reason. We will never pardon whoever provokes the dignity of the supreme leadership of our country but will make those pay dearly for what they have done by all means.”

Senator Cruz responded with pure sarcasm upon seeing coverage of the article, which is sure to ruffle North Korea’s feathers even more. See Below

“As I told Cory, I was always a bit jealous that he had attracted N Korea’s ire like that. Well now, Kim Jong Un has unloaded on me,” he continued.

“Now, North Korea has called me ‘a demon in human shape…with extreme misanthropy or a hysteric psychopath bereft of reason.’ So Cory, I’ll see your hairless dirt-ball, and raise you a misanthropic demon!” he concluded. See Below

CBS WH Reporter: ‘I Felt Safer Reporting In North Korea’ Than I Do At The WH, Instantly Gets Blasted