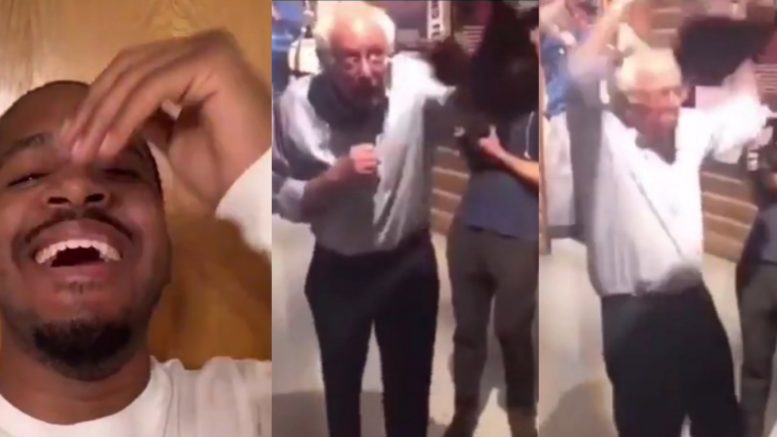 On Tuesday, Democrat Presidential candidate and Senator Bernie Sanders suffered immediate humiliation around the web after a video went viral of him getting knocked in the face with boxing speed bag after swinging at it.

Conservative comedian, Terrence Williams couldn’t help but to chime in on the fun and ridicule Bernie over the hilarious episode.

In his reaction, Terrence could be seen laughing hysterically while he played the video of Bernie over and over, including in slow motion.

He said, “Bernie, what are you doing? Boy, how you gonna try to be our next President? You can’t even defend yourself! How you gonna defend us?”

“Bernie, why you fightin’ like that? You fight like a little kid!” Terrence continued as he mocked Sanders’ boxing form. Video Below

“You can’t defend us like that! Boy, them foreign leaders gonna beat your butt,” he declared. “Bernie can’t even bust a grape, so I know you ain’t gonna be able to bust through the election fightin’ like that, buddy boy — it’s not happening.”

“And, I don’t feel ‘The Bern.’ I feel a bunch of weakness punching with your chest,” Terrence added.

“Who you think you’re scaring,” Terrence asked. “You aren’t scaring Trump punching like that. Boy, he will demolish you in the election, swinging like that.” Video Below

In ending, here is Carpe Donktum’s version of the Bernie Sanders video.