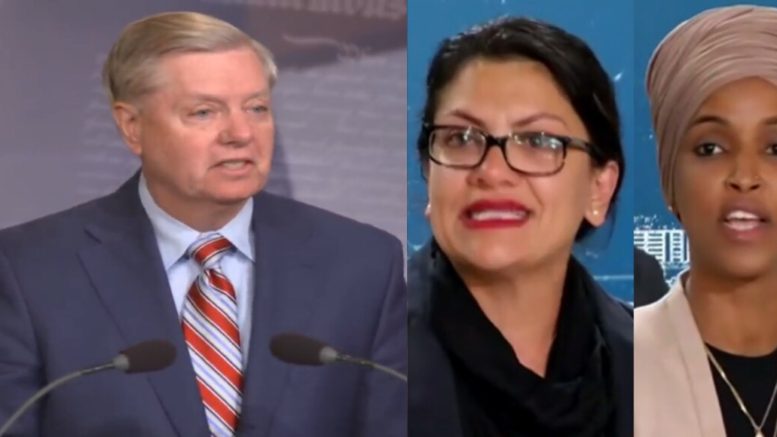 Senate Judiciary Chairman, Lindsey Graham (R-SC) took to Twitter Tuesday where he responded to Reps. Rashida Tlaib (D-MI) and Ilhan Omar (D-MN) after their press conference that they held on Monday.

This comes after Omar and Tlaib were denied entry to Israel last week. The two congresswomen canceled their planned trip, despite Israel granting permission to enter the Jewish state on humanitarian grounds.

On Monday during their press conference, Ilhan and Tlaib condemned Israel and pushed back at Prime Minister Benjamin Netanyahu and President Donald Trump.

“We cannot let Trump and Netanyahu succeed in hiding the cruel reality of the occupation from us,” said Omar. “The occupation is real. Barring members of Congress from seeing it does not make it go away. We must end it together.

“The decision to ban me and my colleague, the first two Muslim American women elected to Congress, is nothing less than an attempt by an ally of the United States to suppress our ability to do our jobs as elected officials,” she continued. “Netanyahu’s decision to deny us entry might be unprecedented for members of Congress, but it is the policy of his government when it comes to Palestinians.”

However, she hinted at a possible move of cutting aid to Israel and added, “We have a constructive role to play. We give Israel more than $3 billion in aid every year. This is predicated on there being an important ally in the region and the only democracy in the Middle East, but denying visits to duly elected members of Congress is not consistent with being an ally. And denying millions of people freedom of movement or expression or self-determination is not consistent with being a democracy.” (Continued Below)

Senator Lindsey Graham responded Tuesday in a series of tweets:

He wrote, “Congresswomen @RashidaTlaib and Omar are calling on Congress to reconsider aid to Israel? I have. It’s time to provide MORE assistance to Israel for their missile defense program.”

“It’s time to provide MORE assistance to Israel for their missile defense program. Why? Because Iran has provided thousand more missiles to Hezbollah in Lebanon and openly supports Hamas in Gaza,” Graham continued.

“The threats from Iran — to our close friend and ally Israel — are only growing. Iran has already broken enrichment conditions regarding their nuclear program. The Iranians are a bad actor in the region, sowing discord at every turn,” he added. (Video  Below)

Rep. @IlhanMN says Israel is not an "ally" to America and is not a "democracy."

Omar goes even further, saying America should cut our foreign aide to Israel.

Then she said Israel is "occupying Palestinian land."

These are vicious anti-Semitic lies.

Congresswomen @RashidaTlaib and @IlhanMN Omar are calling on Congress to reconsider aid to Israel?

It’s time to provide MORE assistance to Israel for their missile defense program.https://t.co/F9qsoOx6i8

The threats from Iran — to our close friend and ally Israel — are only growing.

Iran has already broken enrichment conditions regarding their nuclear program.

The Iranians are a bad actor in the region, sowing discord at every turn.

(Related: Pastor Jeffress On Tlaib & Omar Getting Barred By Israel: ‘They Were On A Propaganda-Spewing Mission’)

President Trump On ICIG & Whistleblower: “He’s A Fake Whistleblower & Frankly, Somebody Ought To Sue His Ass Off”

Graham Rips Members Of Congress Who Question If Soleimani Posed An ‘Imminent Threat’: “It’s Beyond Disgusting”

Alan Dershowitz Slams Bernie Sanders: “A Self-Hating Jew Who Is Willing to See Israel Be Defeated”