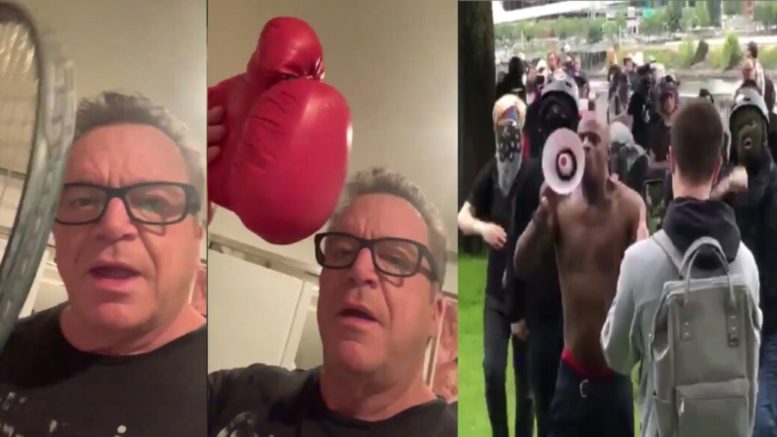 Amid the chaos that occurred over the weekend in Portland, Oregon, the mayor of Portland said Saturday night that his city had avoided the “worst-case scenario” after members of far-right groups and far-left members of Antifa held dueling demonstrations in the center of the city that lasted for hours on end.

“Given the continuing movement and the number of people involved, I am grateful that this was a largely peaceful event,” Mayor Ted Wheeler told reporters. “Police did an exemplary job of de-escalating the situation, keeping the extremists on both sides separate for the most part, and of limiting interactions between individuals.

President Trump wrote on Twitter Saturday morning, “Major consideration is being given to naming ANTIFA an ‘ORGANIZATION OF TERROR.’ Portland is being watched very closely. Hopefully the Mayor will be able to properly do his job!”

Actor Tom Arnold took to Twitter Sunday evening after the chaos unfolded with a bizarre video and claimed that he is “joining Antifa.”

Bridget Phetasy responded to Tom Arnold’s bizarre video after tagging her in the post and wrote, “lololol wut is happening.”

We leave you with a few videos of the violence from Antifa:

It’s time that we call ANTIFA what it is:

This type of violent behavior has no place in a civilized society ⬇️pic.twitter.com/qW5GQhy8fh

This is how Antifa treat police:

"You know you’re a parasite so shoot yourselves, suicide is the only way out"

Former secret service agent, Dan Bongino said, “Everywhere the group ANTIFA (Anti-First Amendment) goes, violence and chaos follows. This is a violent, anti-civil liberties, group of thugs looking to hurt and injure anyone in their way.”

He added, “ANTIFA (short for anti-First Amendment) is the most dangerous anti-free-speech group in America right now. They’re an openly racist group which uses terror tactics and violence to try and suppress free speech.”

We leave you with a mother coming to the rescue:

(Related: Congressman Banks Steps Forward With A Plan To ‘Root [Antifa] Out Of Society All Together’)

Rep. Greene On Antifa/BLM Clashing With Police & Disrupting Diners At D.C. Restaurants: “Are [They] Deserving Of The National Guard?”