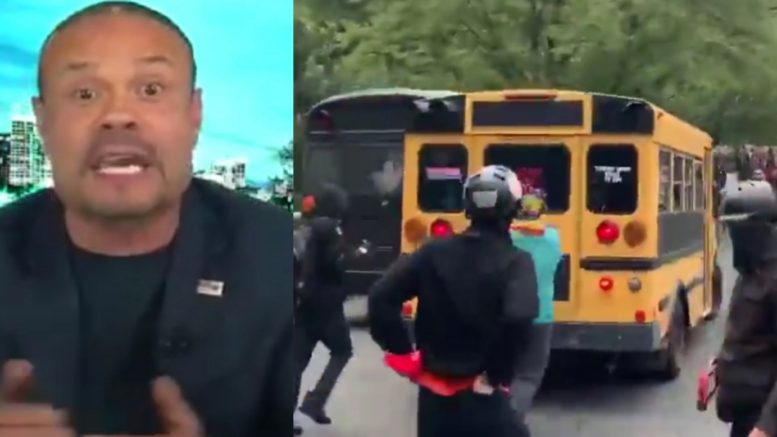 Antifa is back in the spotlight once again following demonstrations in Portland that involved groups from both the left and right.

Videos surfaced on Saturday, showing several members of Antifa participating in acts of violence including mob-chasing a girl and her father who was wearing a patriotic Sparta outfit, hammering buses that were passing by and pepper-spraying individuals that they labeled a threat.

As details of the demonstrations came to light, Dan Bongino tweeted out his disgust with Antifa, and made his case for why they’re a “domestic terror group.

Bongino said in a tweet, “ANTIFA (which is short-hand for Anti-First Amendment) is an ultra-violent group of anti-civil liberties criminals who use terror tactics to silence free speech.”

“They only attack in bunches however because they’re chumps and cowards and they’re afraid to go out alone,” he declared

He then retweeted a video of Antifa attacking a bus load of people with hammers, and captioned it, “The terrorist group ANTIFA (which stands for anti-First Amendment) prefers to attack defenseless people with blunt force weapons like hammers. They are a domestic terror organization committed to attacking civil liberties and free speech.” Video Below

Bongino Responds To Antifa Attacking A Bus With Hammers

Later on, Bongino appeared on Judge Jeanine, where he weighed more on the threat of Antifa and why they should be labeled as a domestic terrorist organization.

Referring to the videos that surfaced earlier in the day, he said, “How is this not a domestic terror group?”

“It’s an anti-First Amendment, anti-civil liberties, violent, aggressive group of thugs, who travel in packs because they’re punk, chump cowards who would never go out by themselves or ever accost someone because they can’t get real jobs. They’re loser, degenerate zeroes.”

.@dbongino joined me to breakdown all of the latest news of the week. pic.twitter.com/VhDqs6FwkS