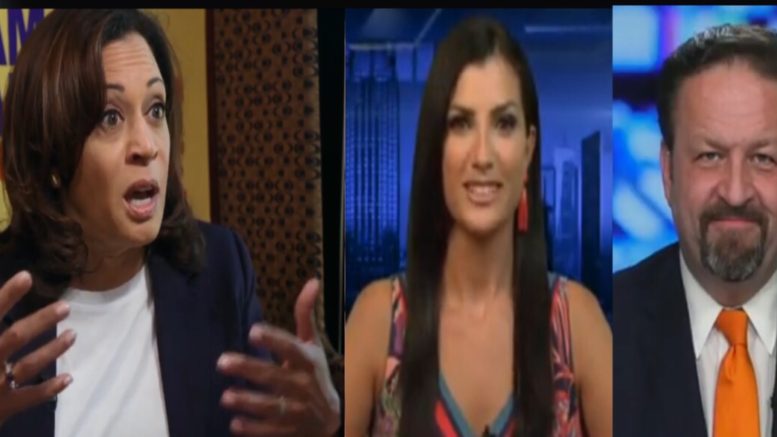 Democratic 2020 presidential candidate and California Senator, Kamala Harris, took to Twitter on Saturday where she claimed that there are “online loopholes” for gun sales.

There’s a problem, however; her statement is tremendously false.

Kamala Harris wrote Saturday, “Guns shouldn’t be a click away for any domestic terrorist with a laptop. The new executive action I announced this week will help close the online sales loophole. As president, I will act to keep guns out of the wrong hands.”

Harris, who is trying to push a political agenda after the recent shootings in El Paso, Texas and Dayton, Ohio, isn’t quite knowledgable about her facts, despite being a former attorney general for the state of California, a District Attorney of San Francisco, and a current sitting Senator.

On Wednesday, after nearly an 8-hour standoff with a shooter in Philadelphia that led to six police officers getting wounded before the suspect was taken into custody, she jumped on CNN to politicize that event as well.

Without knowing all of the facts about the shooting in Philadelphia, Kamala Harris called for tighter gun laws, specifically “more enforcement around gun dealers.” (Continued Below)

One of the plans she laid out would come in the form of executive action and legislation, which would be to “put more resources into the ATF to take more licenses of the gun dealers who violate the law.”

She went on to claim that the main issue is “the failure of Congress” to pass “smart gun safety laws.” She vowed that if she’s elected as President, in the first 100 days, she will take executive action if Congress fails to act on passing such gun laws.

Dr. Sebastian Gorka also blasted Kamala and wrote, “Just how IMBECILIC is this woman? It is impossible buy any firearm online. All purchases must be physically picked up at a Federally licensed dealer after a background check. And she wants to be President? How was she even a prosecutor? Oh yes: Willie Brown.”

Guns shouldn't be a click away for any domestic terrorist with a laptop. The new executive action I announced this week will help close the online sales loophole. As president, I will act to keep guns out of the wrong hands.

Just how IMBECILIC is this woman?

It is impossible buy any firearm online.

All purchases must be physically picked up at a Federally licensed dealer after a background check.

And she wants to be President?

How was she even a prosecutor?

We leave you with a few responses from Twitterverse:

I don’t know what world you live in… but you cannot simply go online and purchase a firearm with the simple click of a mouse!!

How can you possibly be president when you don’t even know the law or you lie about it? There are no online loopholes. You can’t buy a gun like you’re ordering a new weave from Amazon. You have to have to go through Federal Firearms Licensing. Gun sales without it are illegal.

Thank you and have a great day.

Domestic terrorists? You mean like AntiFa? Or do they get a pass because they violently terrorize and assault only conservatives?

If you refuse to call them out then you send a strong message to voters: You support terrorism as long as the victims are Trump supporters.

As a former prosecutor I would think that you would know that online sales of firearms must go through licensed dealers and that background checks already. If you are having trouble remembering something so basic, perhaps you should not be President.

There isn’t a loop hole.
Online gun purchases must be sent to a federally licensed dealer. They won’t ship to a residence.
You do your background check at pickup.

How are you this clueless?

Only a complete and total ignorance to how a gun is purchased would say something this idiotic.

All internet purchases have to go through a FFL licensed dealer for background checks….

Google it! You may learn something👍🏻

We should also close the loophole that allows presidential candidates to lie about mythical loopholes.

A gun is just a click away on my laptop? Ugh… I’ve been getting background checks all these years for nothing 😂😂😂😂

Kamala Harris has a track record

Beto O’Rourke Responds After Rep. Buck Dares Him To Take Away His AR-15: “These Are Weapons Of War”

Chris Christie: Kamala Harris ‘Started The Politicization of These’ Jabs Back in 2020