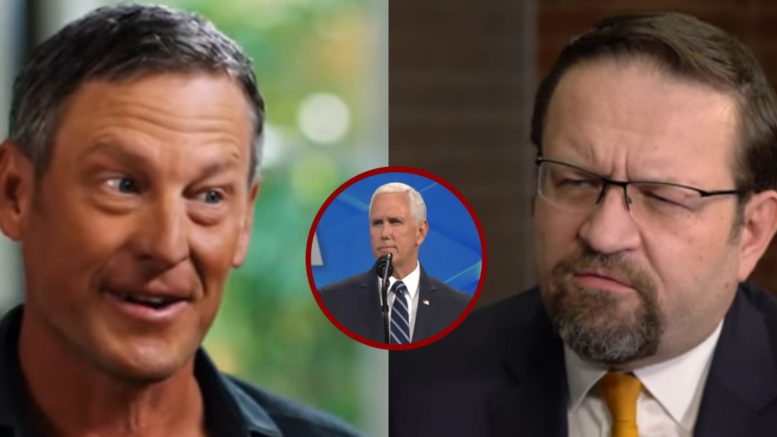 Former professional cyclist Lance Armstrong posted a tweet out of the blue on Saturday afternoon boasting about how he “blew the doors off” 60-year-old Vice President Mike Pence on a Nantucket bike path.

Pence was reportedly in Nantucket for a joint fundraiser between the Republican National Committee and the Campaign to Reelect Donald Trump that took place Saturday evening.

Though it’s unclear if Pence actually was on a bike trail, Armstrong claimed he overtook the Vice President in a f-bomb laced tweet.

Armstrong, who had 7 medals stripped as part of a doping scandal, said, “”I can’t drop many people on a bike these days but I just blew the f–kin’ doors off Mike Pence on a Nantucket bike path. Day. Made.”

Sebastian Gorka fired back at Lance upon seeing the tweet. See Below

“A perfect example of why [Trump] is POTUS,” he concluded.

Armstrong also got humiliated by the rest of Twitterverse as a result of his tweet. See Below

A perfect example of why @realDonaldTrump is @POTUS. pic.twitter.com/raIBKvfgox

We leave you with some more highly engaged responses to Armstrong:

You literally cheated to get famous and now you’re bragging about going faster on a bike than a guy who’s never raced in his life. Nice, dude.

Remember when you lost all your titles because you’re a cheater? Pepperidge Farm remembers.

I imagine it is much harder for you to beat anyone now that you’re not doping and disrespecting your entire sport. Pence is better at riding motorcycles…or as most people would call them “real bikes.” @VP

Good grief – Mike Pence is old, and you were a professional bike racer.

And you’re bragging about beating him? Come on!#SoreWinner

PS: And you ought to abandon use of the F-word. You have 3.3M followers – a lot of kids may be ‘listening’.