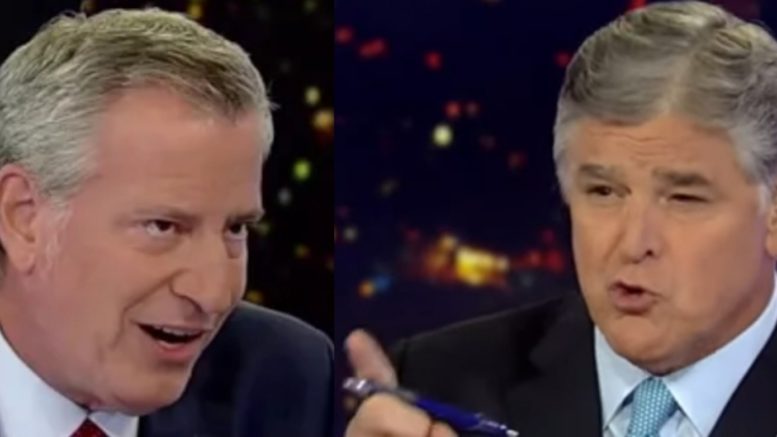 The discussion came as the gun debate is front and center in wake of the two mass shootings that happened last weekend.

De Blasio tried everything to dodge Hannity after being asked if law abiding citizens should have the ability to protect themselves with a gun in the event that a criminal invades their property. He cited how de Blasio, other politicians and celebrities have armed guards protecting them at all times, so why shouldn’t Americans have the same ability?

De Blasio responded by saying New York City is the safest big city in America, and that he thinks there should be more “gun safety measures” and more sufficient background checks surrounding the “rights around guns,” which is not what Hannity was asking.

Hannity rephrased his question, “Does every New Yorker — if they are mentally stable — if they have the background check and they don’t have a criminal background or mental illness problem — Do average people, should they have the same safety you have? And if somebody breaks into their house, would you respect their right to have a firearm in their house?”

“Everyone deserves to be safe,” de Blasio responded. “The answer is not for everyone to have a firearm anymore than it is for every teacher to have a firearm. I believe everyone has rights, but I also believe we need background checks. We need an assault weapon ban. We need a period for purchase.” Video Below

De Blasio denied that he was dodging but still would not provide a simple yes or no answer to Hannity’s question.

Hannity then tried asking the same question again and again in more simplified forms, but de Blasio kept repeating what he had already said, not giving a straight answer. Video Below

Hannity told de Blasio that his answer is “no” but he is really just “afraid to say it.” De Blasio denied it and accused Hannity of trying to “paint a picture on your own terms.”

Trump on ‘Twitter Files’ Release: ‘Do you Throw the Presidential Election Results of 2020 OUT & Declare the RIGHTFUL WINNER or do you have a NEW ELECTION?’