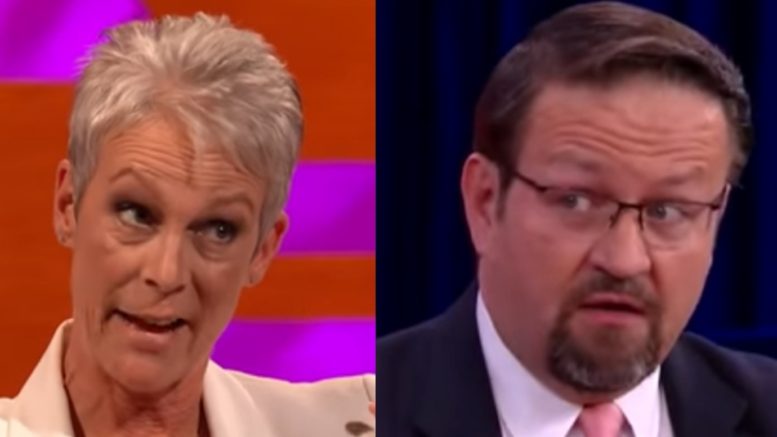 In wake of the Dayton and El Paso shootings, Democrat politicians and celebrities have been seizing the moment to push the concept of gun control in a fashion unlike ever before.

On Monday morning, actress Jamie Lee Curtis took a moment to chime in on calls for a gun ban.

Jamie Lee took to Twitter to make a statement in reaction to the weekend tragedies. She tweeted the phrase “assaultweaponsban” over and over — 15 times in one post to be exact.

She then followed up by calling for “Common Sense Gun Legislation Now.”

Ironically, Jamie Lee Curtis has made a fortune in her career making movies, such as True Lies and Halloween, that include guns and “obscene violence”.

President Trump’s Former Deputy Assistant, Sebastian Gorka, pointed this out in a response to Jamie Lee’s tweet. See Below

Related Article: Bongino Slams Those Who Are Trying To Score Political Points From The Shooting: ‘Disturbing, Grotesque’

Gorka replied, “You’re a actress. Who made her millions in a film franchise that was built on obscene violence and cruelty.”

“Perhaps you should hold your tongue at this time of tragedy,” he concluded. See Below

Who made her millions in a film franchise that was built on obscene violence and cruelty.

Perhaps you should hold your tongue at this time of tragedy. https://t.co/RJVSn3Wjr1

Aside from calls for gun control, Democrats have tried to lay blame on President Trump for the shootings, and have ramped up pressure for him to respond to the tragedies along their party lines.

In ending, here’s video of Kellyanne Conway expressing how President Trump plans to react to the shootings.