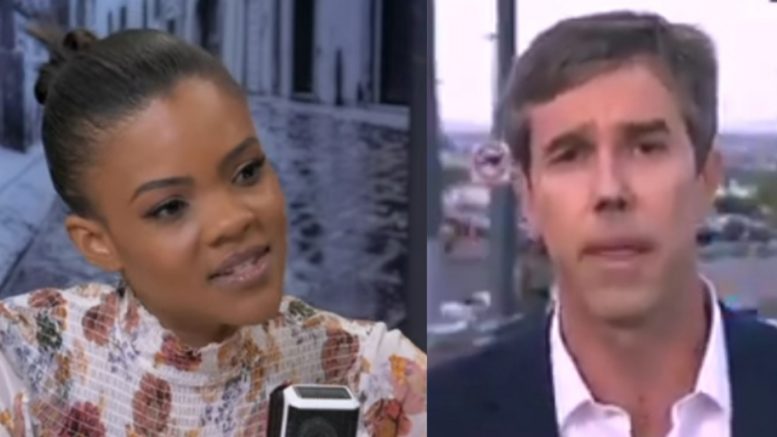 In the aftermath of the weekend shootings that left 29 people dead, Democrat Presidential Nominee, Beto O’Rourke, tried pinning the blame on President Trump by accusing him of “encouraging” violence.

While facing CNN’s Jake Tapper, Beto said, “We’ve got to acknowledge the hatred, the open racism that we’re seeing. There is an environment of it.”

“We see it from our commander-in-chief,” he continued. “He is encouraging this. He doesn’t just tolerate it, he encourages it — calling Mexican immigrants rapists and criminals, warning if an invasion at our border, seeking to ban all people of one religion.”

“Folks are responding to this. It doesn’t just offend us, it encourages the kind of violence we are seeing,” Beto declared.

Related Article: Bongino Slams Those Who Are Trying To Score Political Points From The Shooting: ‘Disturbing, Grotesque’

Candace Owens swiped back at Beto upon seeing his remarks by issuing a classic response through a tweet that has since gone viral. See Below

Candace said, “The Ohio shooter was a self-described socialist and Elizabeth Warren fan. Do we blame @AOC and her squad?”

“No-we do not,” she answered. “We don’t blame anyone but the shooter.”

“Beto O’Rourke, you are a coward for blaming Trump supporters for El Paso.
Rest assure, you will never be President,” she concluded. See Below

The Ohio shooter was a self-described socialist and Elizabeth Warren fan. Do we blame @AOC and her squad?

No-we do not.
We don’t blame anyone but the shooter. @BetoORourke you are a coward for blaming Trump supporters for El Paso.
Rest assure, you will never be President. https://t.co/8QcIcYZEnX

In ending, here is Candace responding to the plague of finger pointing she saw after the El Paso shooting.

“He was a registered Democrat!”

“But he had Trump-supporting tweets!”

Can we not make #ElPaso a Left or Right issue and instead mourn a horrible tragedy together as Americans?
Maybe for once we can discuss the bi-partisan issue of mental health?