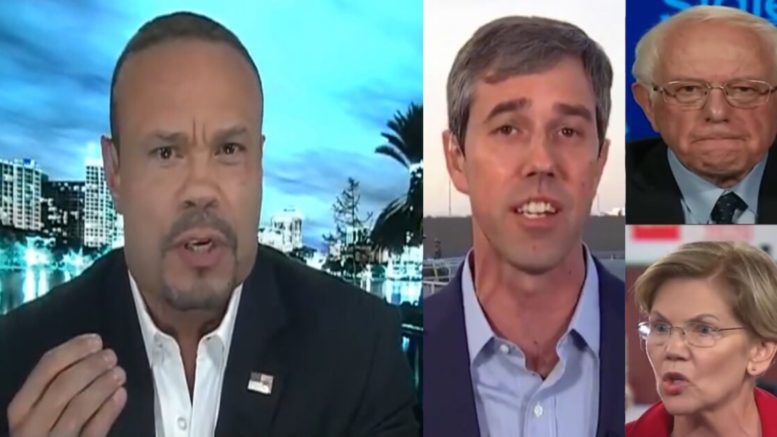 Following this weekend’s mass shootings, many Democratic lawmakers blamed President Trump’s use of rhetoric for the attacks in Texas and Ohio.

“It’s one of the most disturbing, grotesque trends in politics lately,” Dan Bongino expressed. [Emphasized].

“Literally hours, if not minutes after an incident, people jump on their Twitter accounts,” Bongino said. “Politicians looking for votes, support, donations, whatever they’re looking for and instead of having some sense of empathy with the victims of this really unthinkable tragedy, your first instinct is to tweet about whose fault it is other than the actual person who did this?”

Speaking with MSNBC, Democratic presidential candidate Robert Frances “Beto” O’Rourke claimed President Trump’s “open racism is an invitation to violence” and compared the President to the “Third Reich”, blaming the Commander in Chief’s rhetoric. On Sunday, he also claimed in an interview with CNN’s Jake Tapper, that Trump’s “racist rhetoric” was in part to blame for the mass shooting, and believes President Trump is a white nationalist.

Co-host of “Fox & Friends” Pete Hegseth said that all of the Democrat lawmakers are pointing the finger at President Trump claiming that it’s his fault for the attacks. “How do you overcome that and get at whatever solution [that] would actually exist?” he asked. (Continued Below)

“It requires an educated electorate to realize and seek through the fog what’s going on. These are not serious people looking to solve problems. The issue here is when you do that and you suck up air time dedicated to attacking President Trump who clearly, by any sane rational actor, had absolutely nothing to do with this at all. If you’re sane and reasonable, you take away a conversation about what the real problem is,” Bongino responded.

(Related: Hillary Insinuates Guns Are The Problem, Obama Concurs With A Veiled Jab At Trump Regarding Mass Shootings)

Bongino went on to say that there is something going on in our culture. “What is going on in the culture? And instead, you’re worried about getting some extra votes in the Iowa caucus coming up. I mean, this is sick stuff; this is really disturbing,” he added. (Continued Below)