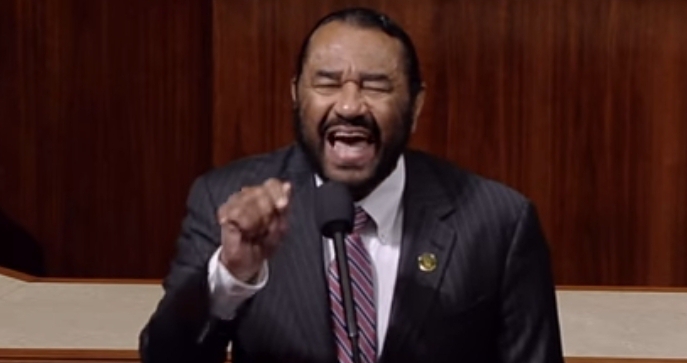 There has been a lot of finger pointing and politicization by the left directed at President Trump in wake of the weekend shootings that left a total of 29 people dead and dozens of others injured.

Over the weekend, several Democrat leaders blamed President Trump’s rhetoric for the shootings. And now, Congressman Al Green is using the situation as a new platform for his ongoing fight for impeachment.

In a string of tweets, Green began his statement by asking that President “show some moral leadership” and he pointed out four ways he thinks this is possible.

Related Article: Terrence Williams Slams The Left For Playing Politics Over The Weekend Shootings: ‘Stop Making This About Politics!’

He said, “Condemn the NRA, condemn white nationalism, declare a national emergency and call for Congress to end the August recess and deal with our domestic terrorism emergency.”

Green then shifted to his neverending call to impeach the President. His reasoning for it this time is because he thinks that Trump is “promoting white nationalistic hate” and “will not resign from the Presidency.”

Green said, “Mr. President, because you have dishonored our country by continually promoting white nationalistic hate and because you will not honor our country by resigning from the Presidency, you leave us with but one immediate choice. #ImpeachNow #EnoughIsEnough” See Below

In ending, here is Charlie Kirk’s rebuttal to the left for blaming the President and Republicans for the deadly shootings.