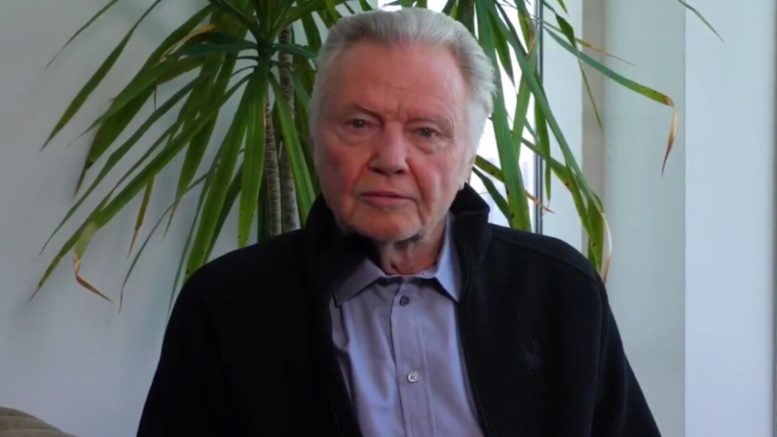 Academy award-winning actor and patriot, Jon Voight, took to Twitter on Tuesday with a special message of unity and support of President Donald J. Trump.

In the wake of the President shining a spotlight on Baltimore and the tragic shootings in El Paso, Texas and Dayton, Ohio, Voight came forward on Sunday with a video message about racism directed at the “angered left”.

“This is not a race for color or fame, this is a journey that is for truth,” Jon Voight said in his video. “My fellow Americans, too many are angered at the words of racism. This has been a big issue for the black communities since the civil war. But this has been solved long ago by our forefathers for peace and love.”

“It seems that the angered left and angered minorities want to hold President Trump accountable for past lives,” Voight continued. “You see we have been gifted with truth. And as I see it, anger is among the old chains that were binding to the people of slavery– old wounds that still seem fresh.”

Voight went on to say, “Let me talk about old wounds: the Holocaust. That my friends are wounds that live among the Jewish and non-Jewish that lost lives.”

He noted, “This is not about color, race, religion. This is the United States of America, a nation built on trust and liberty, a soil of greatness –a land of opportunities where all can grow and succeed with freedom, a nation of greatness.” (Continued Below)

“These angered leftwingers preach love but only pollute,” Voight continued.

“We must understand this is a nation of liberty, and this President is honoring all. He is not a racist but a man who loves his country and has every intention to make this land great again,” he expressed.

“Let us vote for this countries safety, and may all the angered left find truth– what truth stands for; God, liberty, love, justice for all. God bless,” Voight concluded. (Video Below)

Hillary Slams The IRS & Treasury For Not Releasing Trump’s Taxes, Instantly Gets Destroyed