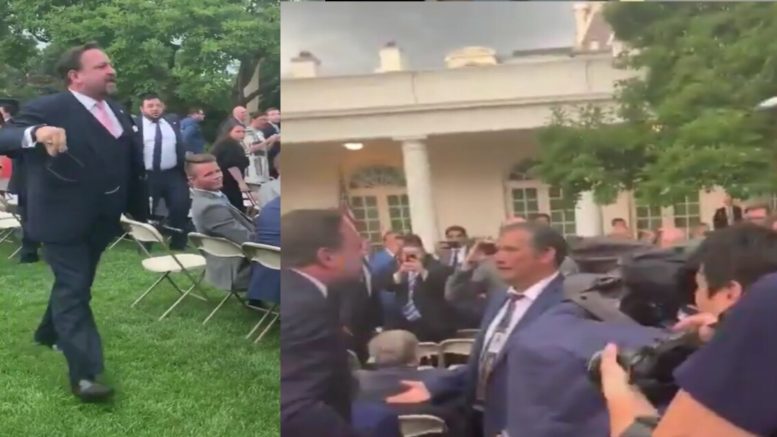 Brian Karem, an anti-Trump White House reporter for Playboy and a political analyst at CNN, announced on Twitter Friday that he received an email and his press pass is suspended for 30 days.

Karem gave no details with his tweet, but Brian Stelter from CNN tweeted that the letter cited his behavior in the Rose Garden on July 11 after a confrontation with former Deputy Assistant to the President, Sebastian Gorka.

“Received an email today shortly before 5 p.m. from the WH: as of Monday afternoon my press pass is suspended for 30 days,” the Playboy reporter tweeted. “Yes. I can and will appeal this decision.”

Karem has had a number of heated exchanges with members of the Trump administration such as former press secretary Sarah Huckabee Sanders, but more recently, the dustup with former Deputy Assistant to the President, Sebastian Gorka.

Last month, guests were invited to a social media summit at the White House and Gorka and Joy Villa had a confrontation with Karem after the President gave a speech in the Rose Garden.

“You’re a punk! You’re not a journalist! You’re a punk!” Gorka told Brian Karem after the Playboy reporter told the President’s guests they were “possessed by demons.” (Continued Below)

Hi Jim.
We were both there.
CNN contributor @BrianKarem told @realDonaldTrump’s guests that they were “possessed” by demons & then proceeded to threatened @SebGorka – saying he should meet him “outside” the WH.
Don’t remember?
Lucky you – I have video.
Why do you lie?#FakeNews https://t.co/Hez0Zffc4x pic.twitter.com/McnO2VQrVG

Yes. I can and will appeal this decision.

>> @BrianKarem received a letter today saying his "hard pass" for White House access will be suspended for 30 days starting Monday. The letter cited his behavior in the Rose Garden on July 11, when he got into it with Seb Gorka. He says he will contest the suspension.