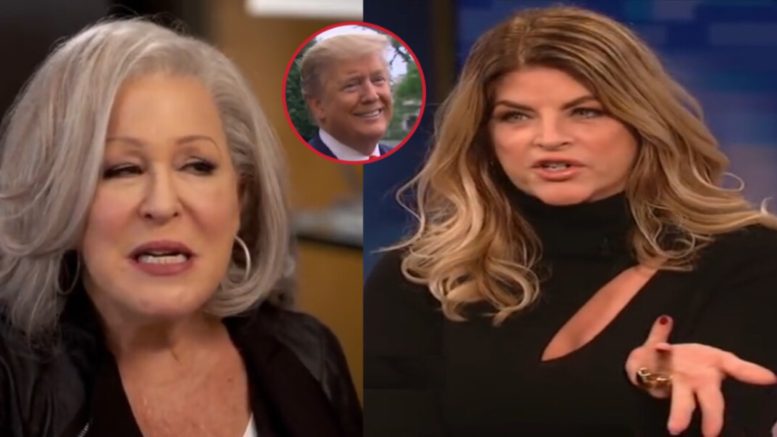 Bette Midler has emerged as one of President Trump’s most vocal critics on Twitter, among other washed-up “celebrities and has-beens.”

Her latest tweet aimed at the President was met with severe backlash and accusations of racism after she posted a photo taken from a Trump rally and pointed to a group of black men in the crowd behind the Commander in Chief.

Bette Midler posted a photo of President Trump and declared, “Look, there are African American men in this shot!”

“How much did he pay them to be “blackground”?” she asked.

Consequently, Midler’s post fell flat as several people slammed her for being “condescending and racist.”

Actress and spokesmodel, Kirstie Alley, was among several who spoke up to call out Midler. (Continued Below)

Alley responded on Twitter, “This is one of the most racist, degrading ‘jokes’ I’ve seen on Twitter & that’s saying a lot.”

She added, “We get it Bette, you hate Trump & that’s your right but to imply Black men have to be PAID to celebrate their OWN political views is pure and REAL racism.” 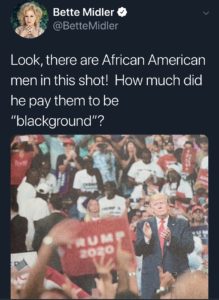 This is one of the most racist, degrading "jokes" I've seen on Twitter & that's saying a lot. We get it Bette, you hate Trump & that's your right but to imply Black men have to be PAID to celebrate their OWN political views is pure and REAL racism. And "BLACKGROUND"?? WTF??!! https://t.co/7PXH75tf8i

Bette doesn’t think black ppl can think for themselves.

Bette Midler, how dare you make a blanket statement that black people can’t think for themselves & that they must be paid off if they don’t agree with you. Your statement is so condescending & racist. “From the overflow of the heart, the mouth speaks.”

Imagine, for one moment, that a conservative said this about blacks at a liberal event. It would be rightly called out as the nasty, divisive racism it is. Black liberals: this is what they *really* think about your ability to think for yourselves.

So you saying black people ave so little moral fortitude that a flash of money is all it takes to get them to play a stooge. I can’t think or a more racist thing to say that disparages an entire race of people. You’ll say anything won’t you.

And this is why I have been a devoted BLACK REPUBLICAN for the past 16 years. I voted for MY PRESIDENT @realDonaldTrump the first time and I will be voting for him again in 2020! There was no doubt in my mind that the democRATS are the real racist so this post if of no surprise.

Yes.. These are black people and there are many many more of us that will stand behind and with our president for the payment of being free to have a voice and our own opinion. We aren’t Driving Ms. Daisy … OR Ms. Midler. Racist!

This is some next level racism right here. As if all blacks can be at a Trump rally is “blackground”?!

Disgusting! And you’re a “progressive”?! More like a retrogressive racist!

(Related: With A Single Photo, Candace Owens Destroys Pressley’s ‘Black Faces’ Remarks: ‘We Are United By Our Love For America’)