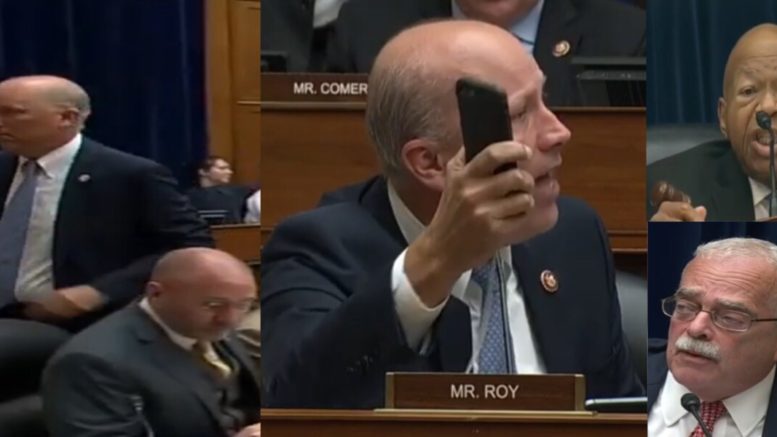 Rep. Chip Roy (R-TX) stormed out in frustration during a House Oversight hearing on Thursday after venting about overrun borders and the trillion-dollar debt as Congress prepares to leave for their August recess.

Democrats on the House Oversight and Reform Committee approved issuing subpoenas to the White House for records and documents related to private texts or emails by Ivanka Trump, Jared Kushner, and various officials Thursday. Roy said during the committee’s hearing it was a “fishing expedition,” as per the Daily Caller.

“It would strike me as important to figure out what on earth we’re trying to find,” Rep. Roy said. “Are we trying to find that Ivanka Trump somehow is in engaged in a conspiracy to cover up emails relating to the death of an ambassador in Libya? It is clear that this is a fishing expedition.”

“In the meantime, while we are doing this … another hundred million dollars of debt’s been racked up,” he said. “Another how many thousands of people have poured across our border. How much more control have we yielded to cartels who truly control and run our border?”

“We got nothing other than dawdling responses about an incompetent effort. And here we sit, mounting up debt for our children and grandchildren. What are we passing down to them? A hundred million dollars of debt per hour? It’s extraordinary. Wide-open borders, destroying communities, endangering lives of Americans in South Texas while I get smirks from my Democratic colleagues–while there are people right now facing attacks from cartels, dealing with them on a daily basis. And we get smirks!” he declared. (Continued Below)

Rep. Gerald Connolly (D-VA) pushed back at Roy and said, “Shame on my colleague from Texas. To question the motivation….” but, Roy fired back, “Shame on this body!”

Connolly responded and said, “I know, we’ve heard. It’s it my time,” to a laughing Congress, but Roy declared, “And you will continue to hear from me in defense of this country!” (Continued Below)

Chairman Elijah Cummings (D-MD) slammed down his gavel in anger and yelled: “Wait a minute! Hold up! He has the time!”

“America deserves the time!” Roy fired back and stormed out.

He also tweeted, “We are $22 trillion in debt and are racking up $100 million of debt per hour on top of that. We have hundreds of thousands of migrants crossing our southern border. We have a broken healthcare system. What does this body care about? @IvankaTrump‘s emails? Fantastic leadership.”

“Leaving town for a month to campaign and parade our ‘accomplishments’ in Congress is an insult to the American people, the law enforcement that protects them, and the migrants suffering at the hands of dangerous cartels who are abusing our immigration laws for profit,” the letter reads. (Continued Below)

We are $22 trillion in debt and are racking up $100 million of debt per hour on top of that. We have hundreds of thousands of migrants crossing our southern border. We have a broken healthcare system. What does this body care about? @IvankaTrump's emails? Fantastic leadership… pic.twitter.com/l5cYI06SBL

33 House Republicans penned a letter to Nancy Pelosi urging that the House not adjourn for recess until addressing ICE funding and asylum loopholes: 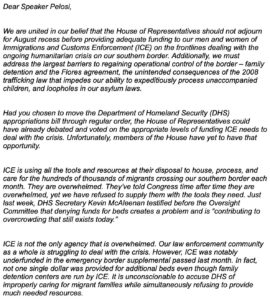 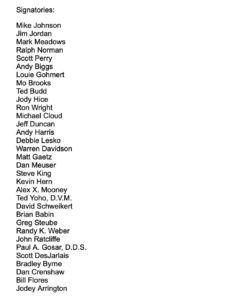 (Related: Charlie Daniels Blasts Out A Stern Message To Those Who Condemn America: ‘Planes Leave Every Day’)