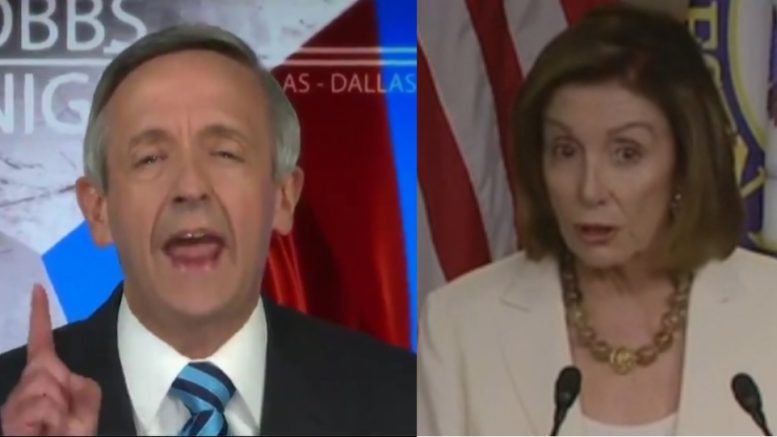 As mass ICE raids are expected to take begin on Sunday, House Speaker Nancy Pelosi is calling on religious leaders to stop it from happening.

While speaking at a closed-door whips meeting, Pelosi told members “that she plans to reach out to religious leaders to encourage them to oppose the efforts,” according to Politico.

During her press conference, Pelosi claimed that the ICE raids that were planned a couple weeks ago were called off because, she believes, Evangelical leaders advised the President against taking action, and she’s hoping it will happen again.

Pelosi said, “They were very concerned that this goes too far because these raids were not what they signed up for with President Trump. And I think their calls to the president made a difference. Hopefully the president will think again about it or these groups will weigh in once again.”

He began by stating, “There is nothing immoral or un-Christian about the President enforcing the law. I mean that is his constitutional as well as his God-given responsibility.” Video Below

“I don’t recall Nancy Pelosi calling on us to demand that President Obama stop his deportation of three million illegal immigrants that earned him the title of ‘Deporter-In-Chief’,” Jeffress continued. “It seems like gross hypocrisy to me.

Pastor Jeffress went further to say that the crisis at the border is “100 percent the fault of the Democrats.” He cited how Democrats are not working with the President to close asylum loopholes because they are focused on one goal, which is: “They are hell-bent on driving this President out of office and overturning the 2016 elections.”

Jeffress declared, “The fact that they would place their hatred for President Trump above the well-being of the nation, is a dereliction of duty at best and treason at worst.” Video Below

#AmericaFirst– @robertjeffress: There is nothing immoral or un-Christian about @realDonaldTrump enforcing the laws. That is his constitutional as well as his God given responsibility. This humanitarian crisis is 100% the fault of the Dimms. #MAGA #Dobbs pic.twitter.com/qIAeOFG4sz