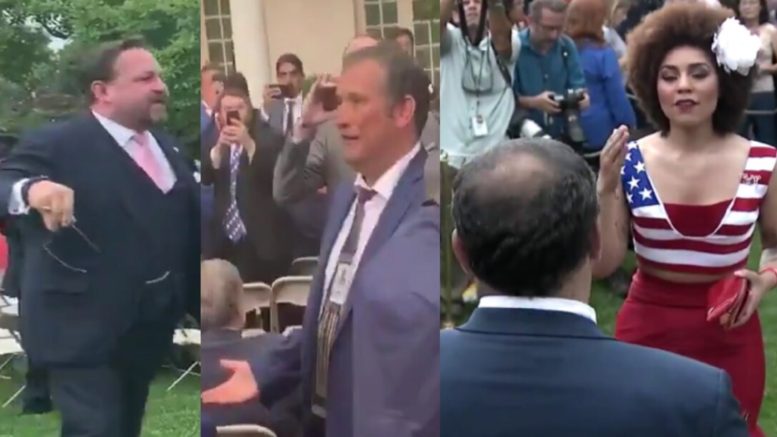 President Trump held a press conference in the Rose Garden at the White House on Thursday and afterward, Former White House staffer Sebastian Gorka and Joy Villa were caught on video going off on White House “fake news” reporters.

The confrontation took place after President Trump hosted a press conference announcing an executive order to tally non-citizens through the Commerce Department, per Washington Examiner.

“You’re a punk! You’re not a journalist! You’re a punk!” Gorka shouted at Brian Karem, a reporter for Playboy.

Guests who were invited to the social media summit cheered on Gorka; another person can be heard saying he should not be “attacking journalists like this.” A Secret Service agent then tried to keep the two groups separate, as per Washington Examiner.

Self-proclaimed ‘citizen journalist’ and avid Trump supporter, singer Joy Villa was next to get into a disagreement with Brian Karem about what is and isn’t journalism.

“Fake news is over. We respect you guys, but you gotta stop reporting fake news,” she expressed. “If you’re going to tell us you’re a journalist, then let us know when you have a ‘political opinion piece.'” (Continued Below)

“Do you verify the facts?” Joy Villa asked Karem, adding that Karem should label himself opinion.

Next, she told him he should “just be a gentleman” after the scuffle with Gorka. “Be a gentleman and behave,” she urged.

Someone in the background could be heard telling Karem “enough.” (Continued Below)

Hi Jim.
We were both there.
CNN contributor @BrianKarem told @realDonaldTrump’s guests that they were “possessed” by demons & then proceeded to threatened @SebGorka – saying he should meet him “outside” the WH.
Don’t remember?
Lucky you – I have video.
Why do you lie?#FakeNews https://t.co/Hez0Zffc4x pic.twitter.com/McnO2VQrVG

Villa and @Playboy's Karem get into a disagreement about what is and isn't journalism. pic.twitter.com/PU9VmGLZGJ

Gorka responded on Twitter to the altercation, saying, “These people are not journalists. They’re punks and political saboteurs.”

Nothing like getting a member of the FAKENEWS challenge you to a fight when you’re both standing in the Rose Garden of the @WhiteHouse.

These people are not journalists.

Joy Villa is happy that President Trump liked her dress:

.@realDonaldTrump just told me from the podium…"stand up. I like your dresses. Saw you the other day. You looked fantastic " 😭👑🙏🏽🇺🇸🥰❤️💕😆

Another reporter asked Gorka why he blocked him on Twitter:

After the @POTUS statement, I queried @SebGorka (former deputy assistant to @POTUS) in the @WhiteHouse Rose Garden about why he blocks so many journalists (including me) on Twitter, despite insisting that people on social media shouldn't be blocked. Here's what happened. pic.twitter.com/ujpztNDncb

We leave you with the icing on the cake. CNN White House reporter Jim Acosta tweeted how the press were all in the back, while President Trump’s guests were in the front:

The scene in the WH Rose Garden. All WH press in the back. Trump’s social media allies in the front rows. pic.twitter.com/wi8m4yW53N

(Related: Kellyanne Fires Back After Acosta Asks If Trump Will Tell The Truth: ‘You’re Such A Smart–, A Lot Of These People Don’t Like You’)

Alice Cooper RIPS Politicized Musicians: ‘You’re Telling Your Fans Not To Think For Themselves!’

After Lunch, Trump Opens Up To Reporters On How He Feels About Mueller’s Report: ‘It Could Not Have Been Better’