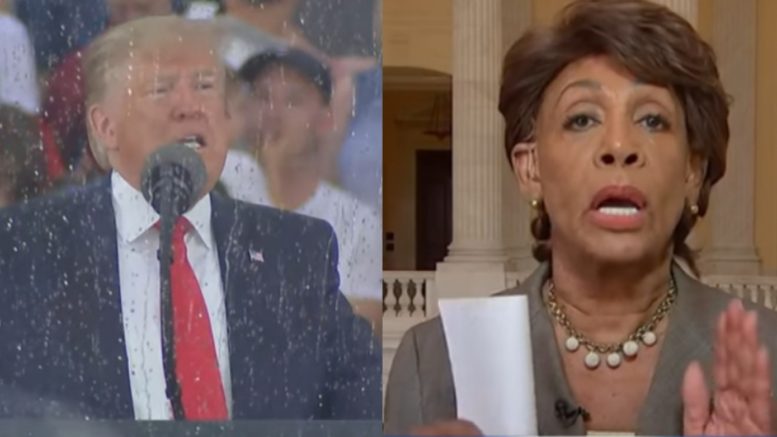 President Trump made a rare gaffe during his “Salute To America” speech after his teleprompter went down.

As a result, Maxine Waters chalked up the error as one more reason why she thinks Trump is an “undeniable candidate for impeachment.”

The gaffe occurred when President Trump made reference to the Revolutionary War in 1775, as his speech bounced back and forth from modern day wars to wars in the past.

He said, “The Continental Army suffered a bitter winter of Valley Forge, found glory across the waters of the Delaware and seized victory from Cornwallis of Yorktown.”

He continued, “Our army manned the air, it rammed the ramparts, it took over the airports. It did everything it had to do. And at Fort McHenry, under the rockets’ red glare, it had nothing but victory. And when dawn came, their star-spangled banner waved defiant.”

When pressed on the gaffe, Trump claimed the rain knocked out the teleprompters in the middle of the sentence. He said, “I knew the speech very well so I was able to do it without a teleprompter but the teleprompter did go out and it was actually hard to look at anyway because there was rain all over it but despite the rain it was just a fantastic evening.”

Maxine Waters, however, was less forgiving. And on Sunday, she targeted Trump’s gaffe and blended it within her argument for impeachment.

Maxine said, “No, Trump. The US military did not take over airports in the 1700s.”

She added, “Your ignorance of history & lack of respect for the Constitution, added to your lies, misogyny, fraudulent & racist background has made you an undeniable candidate for impeachment.” See Below

No, Trump. The US military did not take over airports in the 1700s. Your ignorance of history & lack of respect for the Constitution, added to your lies, misogyny, fraudulent & racist background has made you an undeniable candidate for impeachment.

Waters also blamed Trump for homelessness in America, but her nemesis, Omar Navarro stopped her in her tracks. You can read more on that by CLICKING HERE.