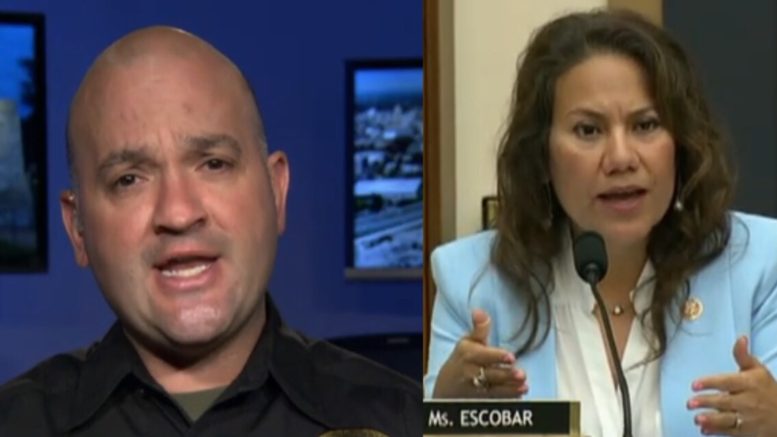 According to a report from the Washington Examiner, a Democratic TX congresswoman is sending staff to Mexico’s northern border town of Ciudad Juárez to find migrants returned from El Paso, Texas, under the “remain in Mexico” policy, then coaching them to pretend they cannot speak Spanish to exploit a loophole letting them return to the U.S.

The National Border Patrol Council’s El Paso chapter and several Customs and Border Protection personnel told the Washington Examiner aides to Rep. Veronica Escobar, who took over 2020 Democratic presidential candidate Beto O’Rourke’s district, and the local Catholic diocese have interviewed thousands of migrants in Juarez over the past few weeks to find cases where Department of Homeland Security officials may have wrongly returned people, as per the Washinton Examiner

“What we believe is happening is Veronica Escobar’s office is going … to basically second-guess and obstruct work already done by the Border Patrol,” said one senior union official, who shared evidence with the Washington Examiner from concerned CBP managers and rank-and-file members. Those documents have been held to protect identities.

Under the bilateral Migration Protection Protocols, or “Remain in Mexico” policy, anyone returned must be fluent in Spanish because they may have to reside in Mexico up to five years until a U.S. federal judge decides their asylum claim. A Democratic politician’s aides reescorting people back to the port are telling officers the Central American individual with them cannot speak Spanish despite their having communicated in it days earlier, CBP officials said.

Escobar’s team has sought interviews with 6,000 people who were returned last month, according to one CBP official. The union learned from an intelligence unit within CBP that those doing the interviews are wearing recording devices during the interviews to tape conversations and possibly listen back later.

“They went through and interviewed everybody, cherry-picked them, brought them back, and now are using them as tag lines. They’re going over there and manufacturing a lot of these issues,” said the union official.

“Resources are being diverted into a foreign country in an attempt to reverse already-decided legal action, meaning these people were found inadmissible under a new program and they must remain in Mexico. They’re trying to subvert that,” the official said. (Continued Below)

Related: Pelosi Claims ‘A Violation Of Status Is Not A Reason For Deportation’ & Asks ‘What’s The Point’ Of Interior Enforcement)

Garza explained that the “Remain in Mexico” policy is working as apprehensions have dropped 30%. “… All thanks to President Trump and the ‘Remain in Mexico’ policy–great difference and we appreciate that,” he said.

Provided the report is true, Garza said, “The only way you can explain this is that these congressmen, these Democrats– hate President Trump so much that they’re willing to go to Mexico to bring these people across to commit fraud. It’s unbelievable. Hopefully, the U.S. attorney’s office can look into this incident and see if there [are] criminal charges that are pending here, see if this can be investigated– see if somebody can get charged for committing fraud.” (Video Below)

Garza noted the border agents are overwhelmed as Congress isn’t doing anything to help and deny there is a crisis at the border. “When Democrats denied there was a crisis when they were blaming President Trump, they were in denial. Now all of a sudden they’re worried because there’s overcrowding? They’re worried there’s not enough space? Well, guess what? That’s what we’ve been saying, that’s what we’ve been talking about!” He declared. “It’s hypocrisy and it’s political posturing.”