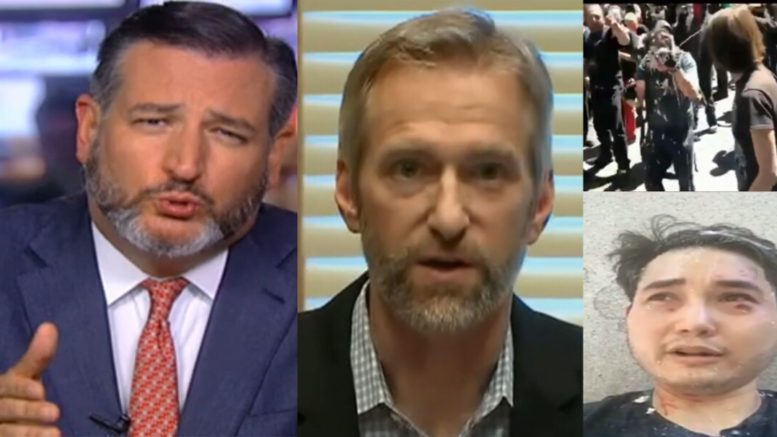 Cruz has called on both the FBI and the Department of Justice to take action.

“To law enforcement: find & prosecute these violent felons,” Cruz tweeted after the violent left-wing Antifa attacks on Saturday. “To federal law enforcement,” he wrote. “Investigate & bring legal action against a Mayor who has, for political reasons, ordered his police officers to let citizens be attacked by domestic terrorists.”

Wheeler is under fire for his response — or lack thereof — to the violent Antifa protesters in the city under his care. During the demonstrations, journalist Andy Ngo was beaten in the head and hit with a milkshake allegedly filled with quick-dry cement. Cruz also went after Vox writer Carlos Maza for encouraging the actions, per Breitbart.

“Troubling, if true,” Cruz said of a screenshot of a Maza tweet posted on Sunday. “Should ‘journalists’ be inciting physical violence against those with whom they disagree?” Maza had encouraged his 132,000 followers to “milkshake them all,” and “humiliate them at every turn” so they would “dread public organizing.”

Wheeler, who is also the police commissioner, has faced criticism after Andy Ngo, a sub-editor and photojournalist for Quillette, a conservative online publication, was reportedly assaulted by antifa protesters, leaving him with a black eye admitted to the hospital because of what a legal representative described as a “brain bleed,” according to the Daily Caller. (Continued Below)

Cruz retweeted a photo of Ngo and wrote, “Sickening criminal assault. To mainstream ‘journalists’: don’t cover this up, don’t ignore it.”

Video showed Ngo being punched and kicked by young men wearing black hooded sweatshirts and face masks. The video didn’t show any police in the vicinity. When a police officer showed up, Ngo asked, “Where the hell were all of you?” according to a video he took on his phone. (Video Below)

On way to hospital. Was beat on face and head multiple times in downtown in middle of street with fists and weapons. Suspects at large.

Police have received information that some of the milkshakes thrown today during the demonstration contained quick-drying cement. We are encouraging anyone hit with a substance today to report it to police.

To federal law enforcement: investigate & bring legal action against a Mayor who has, for political reasons, ordered his police officers to let citizens be attacked by domestic terrorists. https://t.co/5xyCDARICl https://t.co/c0Tf3SsKEf

Thank you for reporting on this sickening assault. Other journalists should do the same & those who facilitated or turned a blind eye to domestic terrorists—e.g., the Mayor—should be held fully accountable. By DOJ. By civil litigators. By criminal prosecutors. AND by the media. https://t.co/uqRRYEmhFe

Troubling, if true. Should “journalists” be inciting physical violence against those with whom they disagree? Calling for assaults with milkshakes apparently laced with quick-dry cement? Is that consistent with journalistic ethics or responsibility? Or the criminal code? https://t.co/A07icUZYGM

Journalist Andy Ngo Prepares To Fight Back After Being Attacked, Hires ‘1A Warrior’ Harmeet Dhillon