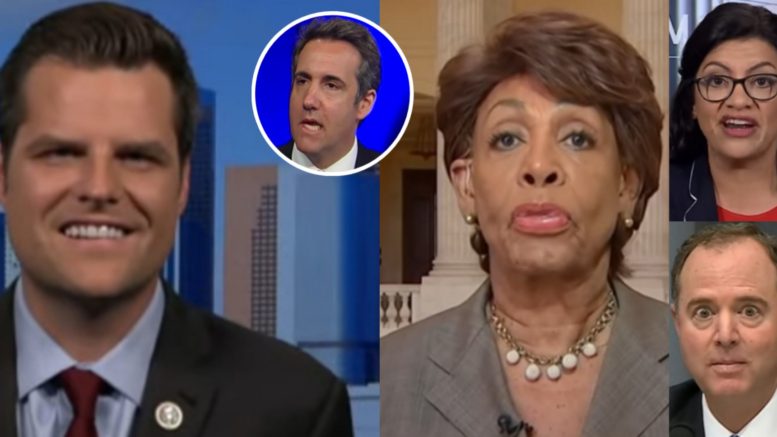 Congressman Matt Gaetz reacted after news broke that he is now at the center of a House Ethics Committee probe.

The probe involves a tweet that Gaetz posted on the night before Michael Cohen’s testimony in front of Congress.

In his tweet directed at Cohen, Gaetz said, “Do your wife and father-in-law know about your girlfriends? Maybe tonight would be a good time for that chat. I wonder if she’ll remain faithful when you’re in prison. She’s about to learn a lot.”

Gaetz later deleted the tweet and apologized after facing backlash over it. However, in the meantime, the Florida Bar Association opened an inquiry on whether Gaetz should be disbarred over the remarks, while the House Ethics Committee is pushing forward with a probe of their own.

In his reaction to the House Ethics Committee’s probe, Gaetz said to Martha MacCallum, “There’s been no findings that I’ve done anything wrong.”

“It really highlights the double standards that exist with today’s left,” Gaetz continued. We’ve got members of Congress — Maxine Waters actually incite violence against Republicans and supporters of the President.” Video Below

He added, “We have Rashida Tlaib, before the ink was even dry on her election certificate, using profanities to talk about how she was gonna impeach the President. So, I guess when a Republican says something that might go a little over line, it might be treated a little differently.”

Gaetz went on to say that at the end of the day, he has no concern about what may come as a result of any probes into him, and that his chief concern stands with real issues affecting Americans every day. And he suspects the probe is nothing but a personal attack on him because he is a strong supporter of President Trump’s policies.

“Look, if Democrats want to prioritize the psycho-analyzing of my tweets, I guess they can go back and reflect on that with their voters. But, nothing that I put on Twitter impacted the lives of Americans and the work that I do in Congress is geared toward we got a safer and more secure country,” Gaetz declared. Video Below

Charlie Daniels Slams Schiff Amid Whistleblower Drama: ‘You Are So Full Of The Stuff I Dig Out Of My Bull Pens’