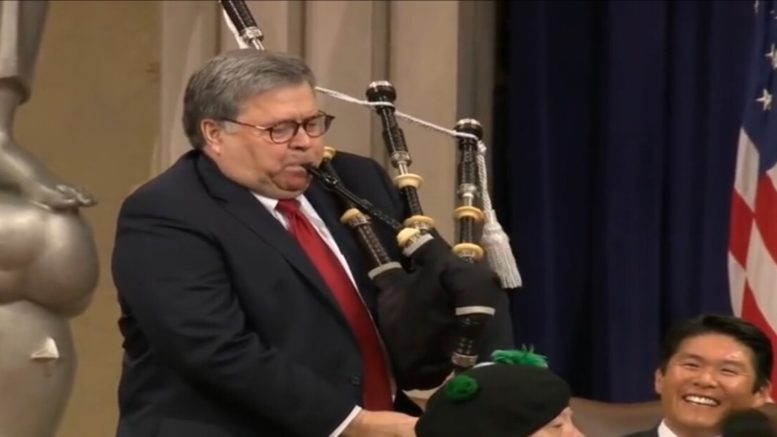 Attorney General William Barr delivered opening remarks at the US Attorneys’ National Conference on Wednesday and surprised the audience by playing the bagpipes with the NYPD Pipes and Drums.

Barr showed off his hidden talent by crushing a rendition of “Scotland the Brave.”

According to CBS News, Attorney General Barr has had an illustrious musical career, including serving as a board member of the U.S. Piping Foundation from 2017 – 2018.

The attorney general’s bagpipe playing is far from just a hobby. According to Pipes and Drums Magazine, Barr takes the bagpipe very seriously — he’s been playing since before his legal career began. Barr was a member of the now defunct U.S.-based Grade 2 Denny & Dunipace Pipe Band – which later evolved into the Scottish & Irish Imports and City of Washington – from the early-1980s until the early-1990s. Barr played with the band in a number of competitions, including the World Championships.

Barr was greeted with applause from the crowd. (Continued Below)

“How was that for an icebreaker?” Barr asked in his opening.

The Attorney General joked that he “discovered the plot” to invite the band and wanted to “counter surprise” his colleagues at the Justice Department. “As you know, I’m very proficient at, dare I say the word, spying,” Barr said.

Barr said the last time he played the bagpipes was Dec. 8 at his daughter’s wedding. Barr’s nomination was announced Dec. 7, and he said his daughter joked he would “upstage her” at her wedding, to which he responded that she was changing her name, “just before the name Barr is dragged through the mud,” per The Hill. (Video Below)

(Related: Alice Cooper RIPS Politicized Musicians: ‘You’re Telling Your Fans Not To Think For Themselves!’)