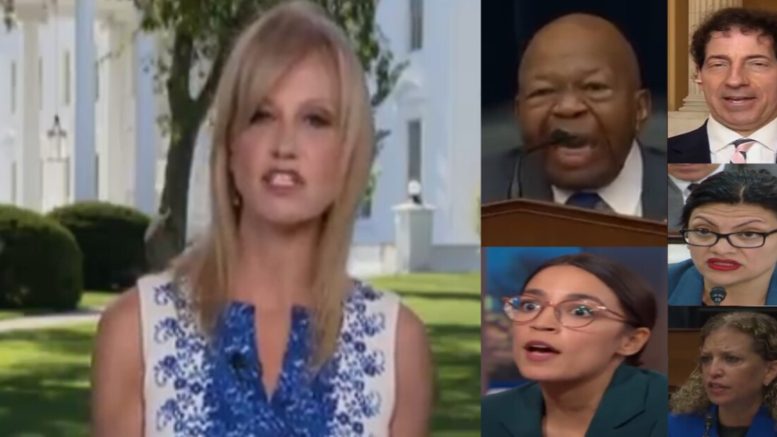 White House Counselor to the President, Kellyanne Conway, spoke with Fox News’ “Fox & Friends” Monday where she pushed back against the allegation that she violated the Hatch Act.

She further responded to reports that the House Oversight Committee plans to vote Wednesday on whether to subpoena her to appear.

Kellyanne Conway dismissed the recommendation that she be fired as an attempt to “silence” her and prevent her from working toward the President’s re-election.

According to Fox News, in a memo sent to the White House, the committee said it “will hold a hearing to examine the recommendation of the independent Office of Special Counsel (OSC) that President Trump remove Counselor to the President Kellyanne Conway from federal service, as well as reports by OSC about Ms. Conway and other Trump Administration appointees.” The memo continued: “The Committee also will hold a business meeting to consider a subpoena in the event that Ms. Conway does not appear.”

The OSC recommended earlier in June that Conway be fired from the federal government for violating the Hatch Act on “numerous occasions” through TV interviews and on Twitter. The Hatch Act is a federal law that limits certain political activities of federal employees, per Fox News.

However, Kellyanne said that according to White House counsel, it is unclear legally whether the Hatch Act “applies to assistants to the President.” (Continued Below)

“You know what they’re mad about? They want to put a big roll of masking tape over my mouth. I helped as the campaign manager for the successful part of the campaign,” she argued.

“I helped by being on television, by being on radio. I helped and ‘they want to silence me.’ Now, this is my First Amendment right. They want to ‘chill free speech’ because they don’t know how to beat him at the ballot box. They were hoping that the other Office of Special Counsel would do the job. Even if the Hatch Act applies, our position is I haven’t violated it, Kellyanne continued. (Video Below)

President Trump said he is not going to fire Kellyanne as she is doing her job and it all comes down to “freedom of speech.”

The White House Counsel’s office issued an 11-page letter that made very clear what is and what isn’t afoot.

Kellyane posted the letter on Twitter after her interview. (See below video)

Kellyanne wrote, “White House Counsel’s strong and intelligent response to OSC’s “report” on the Hatch Act provides important facts, details & legal arguments that many must have missed, choose to ignore, or have difficulty digesting. A useful primer.”

“After admitting that OSC relied solely on the media report to assess Ms. Conway’s comment, you specifically said that the Office had to act quickly because it had been receiving press inquiries and had to be mindful of interest from politicians outside of the Office,” Kellyanne wrote.

“Therefore, political activity does not include merely criticizing policy proposals offered by aspiring candidates who hope to implement them in a future administration,” she added.

“Therefore, political activity does not include merely criticizing policy proposals offered by aspiring candidates who hope to implement them in a future administration.” pic.twitter.com/mHZ5BCOYcD

(Related: Kellyanne Fires Back After Acosta Asks If Trump Will Tell The Truth: ‘You’re Such A Smart–, A Lot Of These People Don’t Like You’)