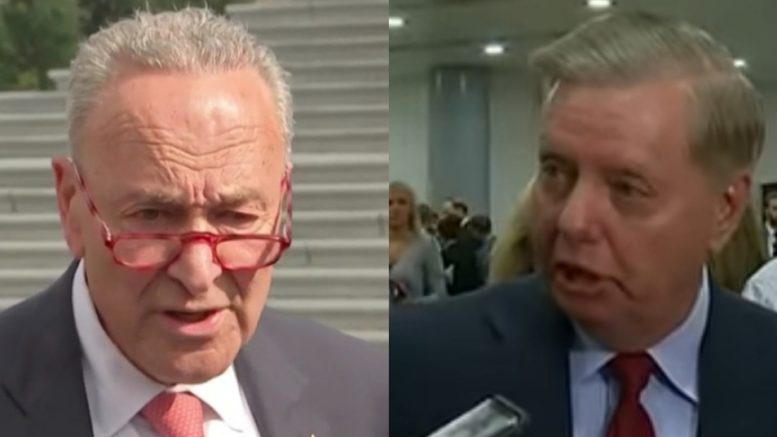 Senate Minority Leader, Chuck Schumer, is on a mission to get an amendment passed that would require President Trump to get Congressional approval before taking any military action on Iran.

Schumer said he and other Democrats are worried that President Trump and his Administration may “bumble into a war” with Iran amid heightened tensions.

As a result, Schumer is pushing Mitch McConnell to hold a vote next week on an amendment that would allow Congress to hold the President in check.

Schumer said, “We have an amendment supported by every Democrat. We are asking Leader McConnell to do the right thing and give us a vote next week on the NDAA on that amendment.”

Senator Lindsey Graham responded to Schumer and set the record straight that President Trump is not the problem when it comes to tension with Iran. He warned that it is actually the Ayatollah who should be the main cause for concern when it comes to conflict.

In a thread on Twitter, Graham said, “Senator Chuck Schumer, President Trump is not the problem — the Ayatollah is!”

“The Iranians rebuffed President Trump’s willingness to negotiate by refusing to respond to the letter presented to them by PM Abe of Japan on behalf of President Trump,” he continued.

Graham added, “Not only did the Iranians give a provocative verbal response, but they also attacked a Japanese oil tanker at the same time. Stay strong, Mr. President!” See Below

Not only did the Iranians give a provocative verbal response, but they also attacked a Japanese oil tanker at the same time.

Here is Graham’s latest thread regarding Iran and the Ayatollah. Video Below

I know Israel cannot tolerate the Ayatollah enriching uranium that would put them on a pathway to a nuclear bomb.

Big decisions to be made.

I hope the United States and the world get this right.

In ending, here is video of Graham discussing tension with Iran.

Don Jr. Rips The Washington Post Over Their al-Baghdadi Headline: ”Enemy Of The People???”