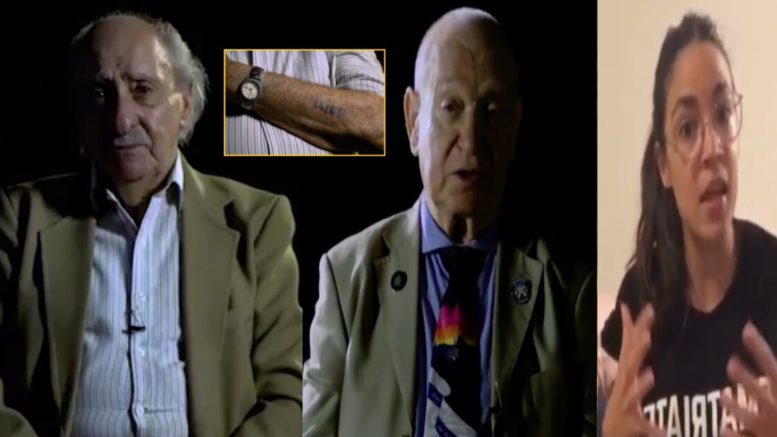 Earlier this week, Rep. Alexandria Ocasio-Cortez (D-NY) accused the Trump administration of running concentration camps on the U.S.-Mexico border in reference to the detention facilities where asylum seekers are held.

The backlash was swift as many lawmakers and social media users chastised her for minimizing the cruelty of the Holocaust. But, that did stop her as it emboldened her to double down on her egregious analogy.

“And the fact that concentration camps are now an institutionalized practice in the home of the free is extraordinarily disturbing,” Ocasio-Cortez said in an Instagram video. “And we need to do something about it.”

Following her remarks, Donald Trump Jr. tweeted a video of two Holocaust survivors with a message directly for Ocasio-Cortez from “Turning Point USA”.

Trump Jr. wrote, “Hey @AOC– guess who knows more about concentration camps than you? These Holocaust survivors. They have a message for you. Why don’t you listen – for once.”

Sami Steigmann declared, “I went through it!” Then, pointing to the camera, he asked, “How can you, looking at my face telling me the camps we have in the south are concentration camps? What you are doing, you are insulting every victim of the Holocaust. Shame on you!”

David Tuck continued, “She’s in politics. She’s looking out for herself. There must be a purpose, a reason. Why would she say it? She wants to be popular? You can’t get popular by annihilating other people. Don’t talk to me about concentration camps. (Continued Below)

David Tuck said his first camp was Posen Stadium, then we went to Auschwitz. After that, he went to Mauthausen and last, he was sent to Gusen.

“For every 10 Jews, 9 were killed. I was lucky. I still have the number on my arm, “Tuck said. “Nobody can deny the Holocaust ever happened to me.”

He continued, “Think about it. I lived on bread and water. I’d wake up in the morning and I’d say, ‘Please God, let me see the light the next day.’ When I heard we are free, and I looked up in the sky and I said, ‘Tell me where can I go?’ I came to America.”

“I’m finished with those words, America. Send the kids to school. Make sure they have an education, it’s still the best country in the world. Enjoy life,” Tuck said with tears in his eyes. “We have no concentration camps here. God bless you all, thank you.” (Video Below)

Sami Steigmann explained, “I’m not only a Holocaust survivor, I was in a labor camp. What happened is I was subjected to medical experiments, and later on a German woman saved my life when I came to a stage of dying of starvation.”

He added, “I went through it. I know what it does to people, and by doing that it, it took away my incentive to be the best that I can be. I achieved that goal here in the United States.”

Portland Adults Entice Children To Say ‘F— The Police’ & Carry Signs, Don Jr. Reacts: “These Parents Should Be Ashamed Of Themselves”

Sunny Hostin Suggests Don Jr. Broke The Law For Retweeting Whistleblower Article, Don Jr. Reacts: “This Is Not Some Secret”