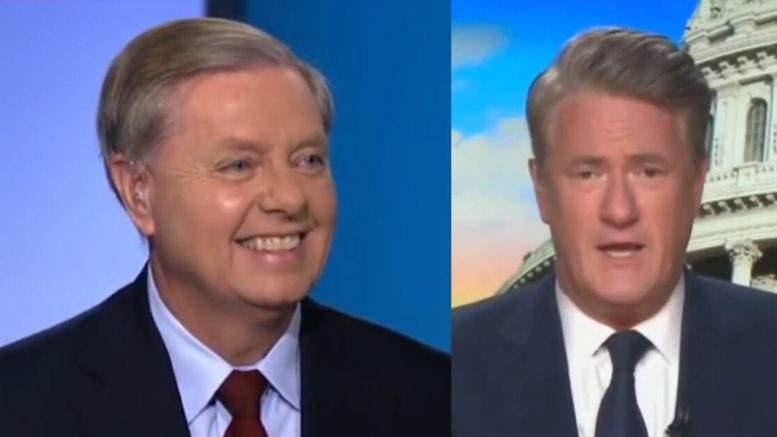 During an interview on the “Brian Kilmeade Show” Tuesday, Sen. Lindsey Graham (R-SC), fired back at MSNBC host Joe Scarborough, who claimed Graham has “sold his soul” by supporting President Donald Trump.

Scarborough contrasted Graham’s views with those of Sen. John McCain, who became a vocal critic of Trump, on Tuesday’s “Morning Joe,” per Fox News.

“He basically sold his soul, sold his political soul for, you know, 20 percentage points inside his own Republican Party. Unlike John McCain, Lindsey Graham didn’t have the confidence and the assurance in his voters that he could speak truth to power and still get reelected in his state,” Scarborough claimed.

Sen. Lindsey Graham pushed back at Scarborough’s comments calling it “cable chatter” and said he’s “not going to worry about pleasing” the anti-Trump host.

Graham noted that President Trump is doing a “very good job” and that he’s “certain” he will be re-elected in 2020.

However, he said that it wasn’t helpful to agree with Chairman Kim Jung Un, but added that Trump believes the North Korean dictator is just trying to get attention. (Continued Below)

“All I can say is that I want President Trump to be successful. He beat me, I’ve tried everything I can to help him where it makes sense. I push back when I think he’s wrong. I like him. John McCain was my dearest friend in the Senate and in the world. The one thing that I learned from John McCain is that you always put the country ahead of anything else,” Graham said.

“I’m the Senator from South Carolina and people want me to help this President. We have disagreements, and when we do, I try to work through them,” he added.

“So cable-chatter is just cable-chatter and nothing’s going to change my relationship with Senator McCain. He was a big influence on my life. He taught me a lot about foreign policy, and I think President Trump is doing a very, very good job, and I’m certain he’s going to get re-elected,” Graham explained. “The one thing I’m not going to worry about is pleasing Joe Scarborough, that’s not on my list.” (Video Below)