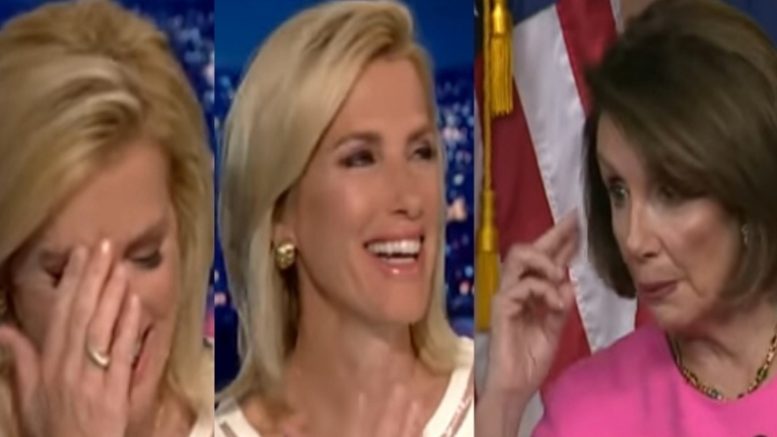 Ingraham also questioned Pelosi’s mental fitness and laid out reasons as to why it’s time Pelosi should hang it up.

“Nancy Pelosi doesn’t seem well. The Pelosi I remember was a hard-charging California congresswoman with big, bold legislative ideas. Although Republicans opposed her Obama-era tax-and-spend, the stimulus or her ObamaCare cramdown, at least she was doing something. But now she spends her days obsessed with President Trump, muttering and sputtering,” Ingraham began.

She proceeded to play a clip of Pelosi where she struggled to form a complete thought during a news conference and Pelosi tried to explain something along the line of “three things.”

Ingraham fired back and laid out her 3 things.

“Number one, when you cannot produce a coherent thought, maybe it’s time to hang it up. Number two, you’ve had the gavel for four months and you have nothing to show for it but resistance. And number three, you as leader of the Democrats are doing a grave disservice and real damage to America by repeatedly refusing to recognize the legitimacy of the duly elected President of the United States and his appointed Cabinet,” Ingraham explained. (Continued Below)

Ingraham played more clips and this time of Democratic presidential candidate Joe Biden, who was also seen struggling with his speech. Ingraham suggested that both Biden, 76, and Pelosi, 79, were too old to hold positions of power in the Democratic Party.

“Think about this: Both Joe Biden, the 2020 front-runner, and Speaker Pelosi are not just out of step for the American people on key issues– to watch them, to observe them, we see that they have lost a step or two or three. Period,” Ingraham said.

“They look like they belong in commercials for Visiting Angels. They shouldn’t have their hands on any levers of power. Stay away. Yesterday she seemed to struggle with the whole subject-verb-direct-object thing,” she continued. (Continued Below)

Ingraham went on to say, “Pelosi is now the leader of the ‘do nothing party.’ Think of just one issue, illegal immigration, and the border crisis. Democrats along are to blame for the shameless over capacity situation at our border patrol stations.”

Then, she suggested that no one should leave town for Memorial weekend “until the necessary fixes are put in place for our border.”

Ingraham pointed out that instead of Pelosi caring about the border crisis, she is more worried about appeasing her radical base with talks of “investigations and impeachment.”

She called out Nancy for being a fraud and said, “Apparently it wasn’t enough to waste $35 million dollars on taxpayer dollars and two years of time. Democrats feel like they’ll do a more in-depth investigation than the Special Counsel. They couldn’t investigate their way out of a paper bag! This is all politics. She will dangle the prospect of impeachment to mollify her nasty base of radicals and of course, irk the President.” (Video Below)

“And this is perhaps the most serious concern of all: Pelosi is chipping away at the foundation of our Constitutional Republic,” Ingraham said. “That when one side loses, the other side accepts the outcome of the election. Democrats have never seen Trump as a legitimate President. The Queen of San Fransico has picked up where the Deep State left off,” Ingraham concluded.

(Related: Rep. Cohen Suggests Pelosi Is Un-Patriotic For Not Pushing For Impeachment: ‘She Needs To Do What’s Right’)