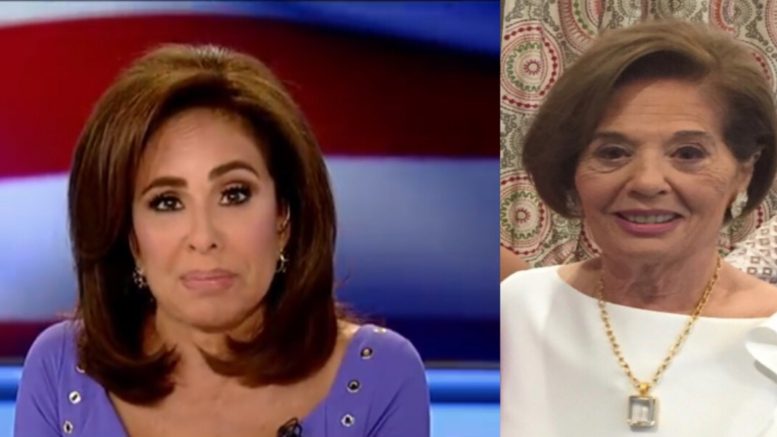 Ferris passed at the age of 90 from pancreatic cancer, according to the Judge’s facebook where she wrote an Obituary for her mother.

Judge Jeanine wrote on Twitter Thursday, “My inspiration, hero, my mom, Esther Ferris passed this morning as I held her close. Arrangements handled by Graham Funeral Home in Rye, NY. My mother loved animals especially rescue animals. In lieu of flowers, contributions in her name to: https://www.chemungspca.org/donate.html”

Along with pictures of her mother, Jeanine wrote on Facebook:

Esther Ferris, the mother of Fox News host Judge Jeanine Pirro, has passed away at 90 from pancreatic cancer. “She was my muse, my hero,” Judge Pirro said of her mother, who served as an inspiration in her career as both a Prosecutor and Judge. “I have lost my best friend. My mother stood up for the victim, for the abused, before it was vogue. She was a great influence on me and everyone around her. She took care of the people who couldn’t take care of themselves.”

Ferris was a passionate volunteer in her community, serving as a Pink Lady at St. Joseph’s Hospital, and in the Women’s Auxiliary at the Arnot Art Museum. To her delight, since she did her own gardening, Ferris won first prize in the Elmira Garden Tour at the age of 88. “She taught me how to fight for the underdog,” Pirro said. The Judge described her mother as “spry” who managed her families properties and would even help shovel snow, doing tasks right up until she became ill. (Continued Below)

Ferris was born in Cortland, NY, grew up in Beirut, Lebanon, and returned to the US to spend most of her life in Elmira, NY where Judge Jeanine and her sister, Mary Louise Gershowitz, grew up. Esther spent time in New York City as a model. “She was a very beautiful person, both inside and out,” Pirro said. Esther leaves behind her sister’s, Jeanine Shahin (Syracuse, NY), Nelly Charlies (San Francisco, CA), Edna Mizher (Lebanon), and her two grandchildren, Cristine Pirro Schwarzman, Esq. and Alexander Ferris Pirro, both of Manhattan, NY.

The viewing will be held on Friday, April 26th from 6-9 PM at The Graham Funeral Home, 1036 Boston Post Road, Rye, NY 10580. The funeral service will be held on Saturday, April 27th at 9 AM at St. John Paul II at Immaculate Conception Maronite Catholic Chuch, 199 North Broadway, Sleepy Hollow, Westchester, NY.

In lieu of flowers please make contributions on behalf of Esther Ferris to Chemung County SPCA, 2435 NY-352, Elmira, NY 14903. Your generous contribution will support no-kill efforts to assist animals in need. (Continued Below)

My inspiration, hero, my mom, Esther Ferris passed this morning as I held her close. Arrangements handled by Graham Funeral Home in Rye, NY. My mother loved animals especially rescue animals. In lieu of flowers, contributions in her name to: https://t.co/qU3evMtZHd pic.twitter.com/xwk1mXPHGD

All my condolences and prayers @JudgeJeanine So sorry to hear the sad news. https://t.co/xUS1RWaWps

Prayers for @JudgeJeanine on the passing of her dear mother.

Oh, how beautiful she was, Judge. I’m so sorry for your loss. No words can describe a broken heart. We know she was so proud of you. May she have eternal happiness with our Lord and nay God comfort you.

So sorry for your loss! Prayers for you and your family! ❤️

God bless you and your family, Judge Jeanine. ❤️❤️❤️

I am truly sorry to hear of the loss of your mother. Please accept my condolences. Prayers to you and your family. pic.twitter.com/T4pfedMjod