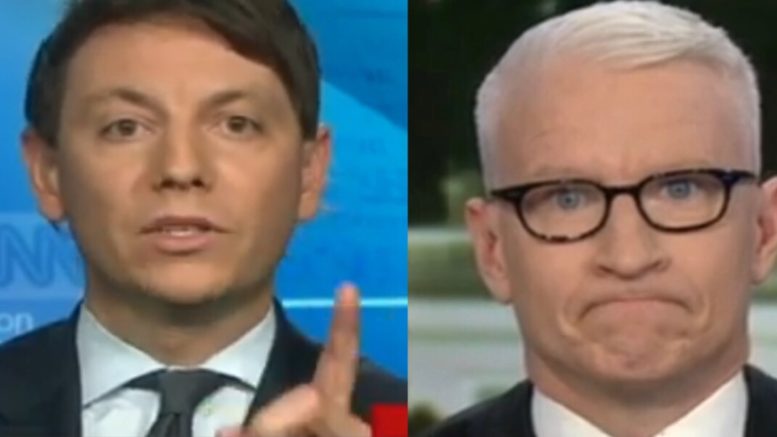 During a segment on anti-Trump CNN, host Anderson Cooper thought he could pull on fast one on Deputy White House press secretary, Hogan Gidley, when he claimed President Trump is a liar, and then scoffed at the idea that CNN “doesn’t lie.”

Gidley defended the President and himself from Cooper’s shameful attacks and put the liberal host in his rightful place.

While CNN has lost all credibility, their refusal to fess up and apologize for their lies is astonishing. All the while, they remain on the defense with attacks and slander. CNN can’t accept the fact that President Trump is in the clear after the Mueller report plainly states that “no collusion’ occurred between the Trump campaign and Russia.

During the interview on CNN, Cooper refused to hear Gidley out and instead, acted like a petulant child.

Cooper asked Gidley if President Trump lied, and Gidley said that the President hasn’t lied to him directly.

Gidley pointed to the big obvious lie when Obama told the public, “You can keep your doctor if you like your doctor”, but Cooper brushed him off and refused to listen. (Continued Below)

While Cooper wouldn’t let Gidley point out real facts, because that’s what CNN does to bury the truth, he interrupted the Deputy White House press secretary and said, “I feel bad that you’re scared to say that your boss lied. I would not work in the situation.”

Gidley fired back and put Cooper in his place, “You have a panel almost every night of people who lie, so I don’t know how that’s any different than what I’m talking about.”

Cooper abruptly ended the segment and refused to admit that CNN is a complete joke and that they do in fact, lie. (Video Below)

(Related: April Ryan Says Sarah Sanders’ ‘Head Should Be Lopped Off’, Mike Huckabee Swoops In: ‘Will The WH⁩ Revoke [Her] Credentials’)

Trump Addresses The Nation After Iran Attacked US Military Bases In Iraq, GOP Reacts: “We Don’t Need Dem Party-Media To Interpret [Trump’s Speech] For Us”