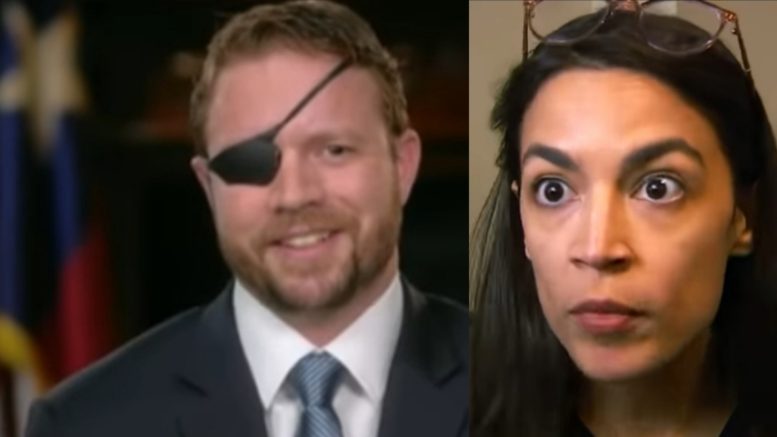 It’s been a battle between freshmen members of Congress, as Alexandria Ocasio-Cortez took a swipe at Dan Crenshaw over his reaction to highly controversial remarks made by Ilhan Omar.

Crenshaw initially slammed Omar in a tweet after video surfaced of her describing the 9/11 terrorist attacks as “some people did something.”

Crenshaw said, “First Member of Congress to ever describe terrorists who killed thousands of Americans on 9/11 as ‘some people who did something.’ Unbelievable.”

Ocasio-Cortez replied to Crenshaw by saying, “You refuse to cosponsor the 9/11 Victim’s Compensation Fund, yet have the audacity to drum resentment towards Ilhan w/completely out-of-context quotes.”

She added, “In 2018, right-wing extremists were behind almost ALL US domestic terrorist killings. Why don’t you go do something about that?”

Crenshaw, who is a retired Navy SEAL, lost his right eye while being deployed in Afghanistan. He served a total of 10 years protecting America from enemies abroad in battles that stemmed from the 9/11 terrorist attack, which killed nearly 3,000 Americans. Video Below

Jesse Watters of Fox News brought Crenshaw on his program, where he reacted to the Ocasio-Cortez by initially saying, “It’s almost not worth responding to.”

Crenshaw blasted Cortez for thinking that co-sponsoring a bill that hasn’t even reached a committee yet, is somehow supposed to mean you are defending 9/11 victims.

He said, “Last I checked, I thought I did defend 9/11 victims when I went oversees and tried to make sure this attack never happened again, and make sure to take the fight to the enemy that committed it.” Video Below

Crenshaw said Omar and those defending her would have been best off saying she misspoke instead of doubling down on her remarks.

He claims that Ocasio-Cortez and others  defending Omar are playing identity politics  to try to silence any kind arguments against them because “they don’t actually have an argument to make.”

Related Article: Dan Crenshaw Reacts After Ilhan Omar Accuses Him Of ‘Incitement’: ‘I Did Not Incite Violence Against You’

Watters wrapped things up by mentioning the headache that newcomers of the Democrat party must be giving Nancy Pelosi. With that, Crenshaw sarcastically  concluded, “Pelosi also isn’t a cosponsor of that bill that [AOC] mentioned.” Video Below