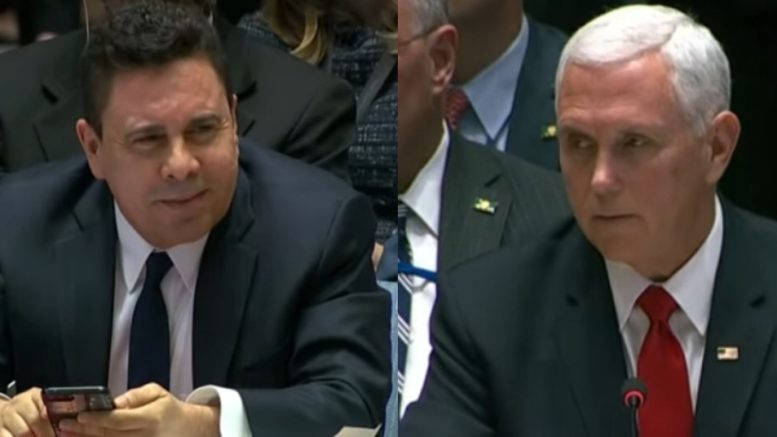 During his speech, Pence declared it’s time for Venezuelan dictator, Nicolas Maduro, to step down.

“With all due respect, Mr. Ambassador, you shouldn’t be here,” Pence said bluntly while looking directly at the representative, Samuel Moncada, who was in the room. “You should return to Venezuela and tell Nicolas Maduro that his time is up. It’s time for him to go!”

Pence pulled a priceless reaction out of the Venezuela’s Ambassador as he looked up from his phone and shook his head at the Vice President’s remarks.

Pence urged the Security Council to act to end the Maduro regime and recognize Interim President Juan Guaido. He said also it’s time for the U.N. to seat Guaido’s representative at the U.N. — and expel the current representative, reported Fox News.

“Now it’s time for the United Nations to act, and for the world to stand with the people of Venezuela as they march for freedom,” Pence declared. (Continued Below)

Pence also announced the U.S. will be providing nearly $61 million in humanitarian assistance, in addition to the $213 million the State Department says it has already provided to Venezuelan refugees living in nearby countries — as well as $43 million in development and economic assistance.

The U.S. has also increased sanctions on the country to pressure the government to hand over power to opposition leaders, who are largely supported by the country’s population.

Fox News reported that after the Security Council meeting, Pence told reporters he believed that the momentum is on the side of the U.S. position. “We really do believe that freedom has the momentum but now it’s time for this body, this historic institution to step forward and to give voice to that momentum and we’re going to be reaching out to nations across the world to join us,” he said. (Video Below)

(Related: In A Profound Speech, Pres Trump Knocks Socialism To The Curb: ‘Socialism Is Dying’)