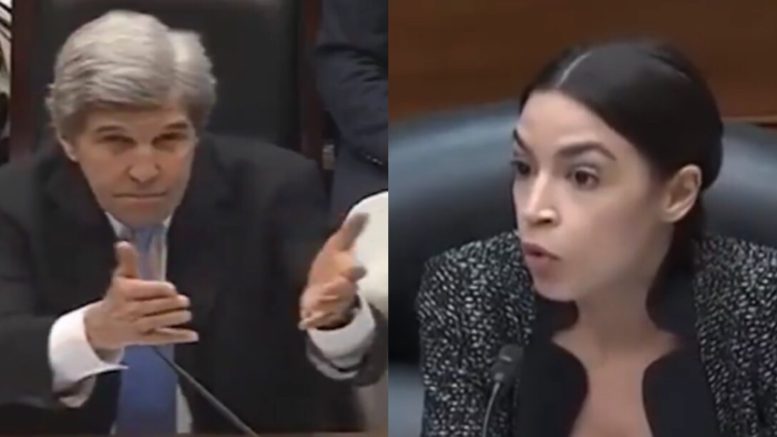 Former Secretary of State, John Kerry, tried to take a jab at President Trump on Tuesday while voicing his concerns about climate change on Capitol Hill.

While testifying during a House Oversight and Reform Committee hearing, Kerry praised Alexandria Ocasio-Cortez and the Green New Deal.

John Kerry emerged to defend Democrats and their fairytale “Green New Deal” which failed to secure a single “Yes” vote in the Senate.

Rep. James Comer (R-KY) asked Kerry during the hearing, “Is printing a lot of new money and opening a bunch of public banks a way to pay for this Green New Deal project proposal?”

Kerry responded, “There are a lot of different proposals about how to proceed. I don’t know that any of them are coming from your party or side of the isle. Do you have a plan to deal with climate change?”

He stated that his focus is on how he is going to move forward. (Continued Below)

He continued, “In proposing what she has proposed together with Sen. Markey, Congresswoman Ocasio-Cortez has in fact, offered more leadership in one day or in one week, than President Trump has in his lifetime on the subject.”

Then, Kerry asked, “My question is: where is your proposal? (Video Below)

ICYMI: @JohnKerry praises Rep @AOC efforts to combat #climatechange as opposed to #PresidentTrump who refuses to lead on this issue. “Congresswoman Ocasio-Cortez has in fact offered more leadership in one day or in one week than #PresidentTrump has in his lifetime on this. " pic.twitter.com/iQEtLpHZWA

(Related: Comedian Kat Timpf Absolutely Shreds AOC’s Latest Rant On The Green New Deal: ‘How About We Fly Around On Unicorns’)