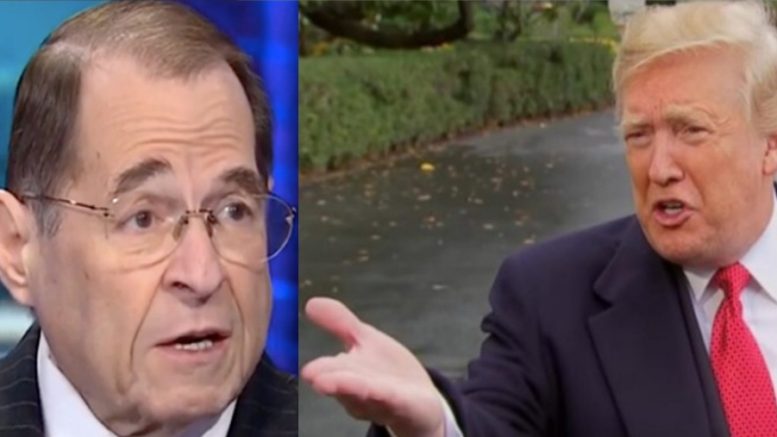 Judiciary Chairman Jerrold Nadler (D-NY) said in a statement Monday that he has scheduled a markup Wednesday at 9 a.m. for the committee to vote on authorizing subpoenas for the report.

Attorney General William Barr told Congress on Friday that he plans to have a public version of the report ready to send to Congress and release publicly by mid-April or sooner.

Related: AG Barr Issues A New Letter With More Insight Of Mueller’s Report, Trump Responds: ‘I Have Nothing To Hide’)

In a press release issued on Monday, Nadler noted what he said was Barr’s refusal to provide Mueller’s full report to Congress without redactions.

“The Attorney General should reconsider so that we can work together to ensure the maximum transparency of this important report to both Congress and the American people. The full and complete report must be released to Congress without delay.” (Continued Below)

President Trump reacted and dropped off a pair of tweets Monday morning.

“Now that the long awaited Mueller Report conclusions have been released, most Democrats and others have gone back to the pre-Witch Hunt phase of their lives before Collusion Delusion took over. Others are pretending that their former hero, Bob Mueller, no longer exists!” Trump wrote.

“No matter what information is given to the crazed Democrats from the No Collusion Mueller Report, it will never be good enough. Behind closed doors the Dems are laughing!” He added. (Continued Below)

The press release further states that the resolution will also authorize the panel to send subpoenas to five individuals who, Nadler says, have yet to turn over documents to the Judiciary Committee following his panel’s requests last month asking 81 entities and individuals to provide records as part of the panel’s sweeping oversight probe of President Trump.

From the House Judiciary Committee:

The resolution to be marked up will also authorize subpoenas to five individuals, Donald McGahn, Steven Bannon, Hope Hicks, Reince Priebus and Ann Donaldson. All of these individuals were sent document requests on March 4, 2019, as part of the House Judiciary Committee’s investigation into the alleged obstruction of justice, public corruption, and other abuses of power by President Trump, his associates, and members of his Administration.

These individuals may have received documents from the White House relevant to the Special Counsel investigation and the Committee’s investigation, or their outside counsel may have. That would waive any applicable privileges under the law and prevent privileges from being used to block requests for documents. The Committee will be authorizing subpoenas as the next step in its efforts to obtain these documents and related testimony. The Committee will not need to issue subpoenas if the documents are produced.

The top Republican on the Judiciary Committee, Rep. Doug Collins (R-GA), criticized Nadler’s move, arguing the law does not allow the Justice Department to share everything in Mueller’s report.

“Judiciary Democrats have escalated from setting arbitrary deadlines to demanding unredacted material that Congress does not, in truth, require and that the law does not allow to be shared outside the Justice Department. It’s unfortunate that a body meant to uphold the law has grown so desperate that it’s patently misrepresenting the law, even as the attorney general has already demonstrated transparency above and beyond what is required.” Collins said. (Video Below)

We leave you with Alan Dershowitz who says this is “completely political” and there is “no legal basis for Dems to subpoena full Mueller report.”

(Related: Newt Gingrich Makes His Case On How Democrats Have Spun Too Far Out Of Pelosi’s Control)